What is Foreshadowing? || Definition & Examples

"What is Foreshadowing?" A Guide for English Students and Teachers

What is Foreshadowing? Transcript (English and Spanish Subtitles Available in Video, Click HERE for Spanish Transcript)

If you’ve ever read a novel that kept you wanting to find out what’s going to happen next, or watched a movie that drops ominous hints about the fate of one or more of its characters, then you’ve probably already experienced foreshadowing.“Foreshadowing” is a narrative device in which suggestions or warnings about events to come are dropped or planted.

Sometimes, foreshadowing is relatively obvious; other times, it can be more obscure or esoteric, especially when certain elements can only be recognized as foreshadowing after the fact, when readers have more information with which to contextualize and make sense of what happened earlier.

So foreshadowing takes advantage of the difference between two additional literary terms that, in conversation, are often used synonymously, but actually mean quite different things:  plot – which is the order of events in a narrative as they would take place linearly – and narrative, which is how those events are told or related .

When a piece of foreshadowing shows up early in the narrative, then, it hints at or gestures toward something that is going to take place later in the plot: usually not by giving away precisely what’s going to happen, but by dropping a hint or make an allusion to something that’s going to occur down the road, so to speak.

We’re being told about it now in the narrative, then, to heighten our anticipation and make us want to find out what’s going to happen. Foreshadowing can serve multiple purposes:

The most common purpose is to generate or increase narrative suspense or tension: this is why foreshadowing is often found at the end of chapters or sections, and why it’s a standard feature in genres that really rely on suspense, like the Gothic novel and the horror movie.

A classic example of this kind of foreshadowing can be found in Mary Shelley’s famous Gothic – and early science fiction – novel, Frankenstein, from 1818. When Victor Frankenstein is telling us about his childhood, for example, he is narrating from the vantage point of many years later – and so he knows more than we as readers do about what’s going to happen in the future.

At one point, for example, Victor alludes to how, during a family vacation when he was 13 years old, a rainy day forced them to stay indoors, and Victor found some old books of occult philosophy by the medieval mystic Cornelius Agrippa. After beginning to read them eagerly, he asks his father about them, but gets only an offhand dismissal. Victor then tells us:

“If, instead of this remark, my father had taken the pains to explain to me, that the principles of Agrippa had been entirely exploded, and that a modern system of science had been introduced . . . I should certainly have thrown Agrippa aside. . . . It is even possible, that the train of my ideas would never have received the fatal impulse that led to my ruin. But the cursory glance that my father had taken of my volume by no means assured me that he was acquainted with its contents; and I continued to read with the greatest pleasure.” (Broadview ed. p. 68) 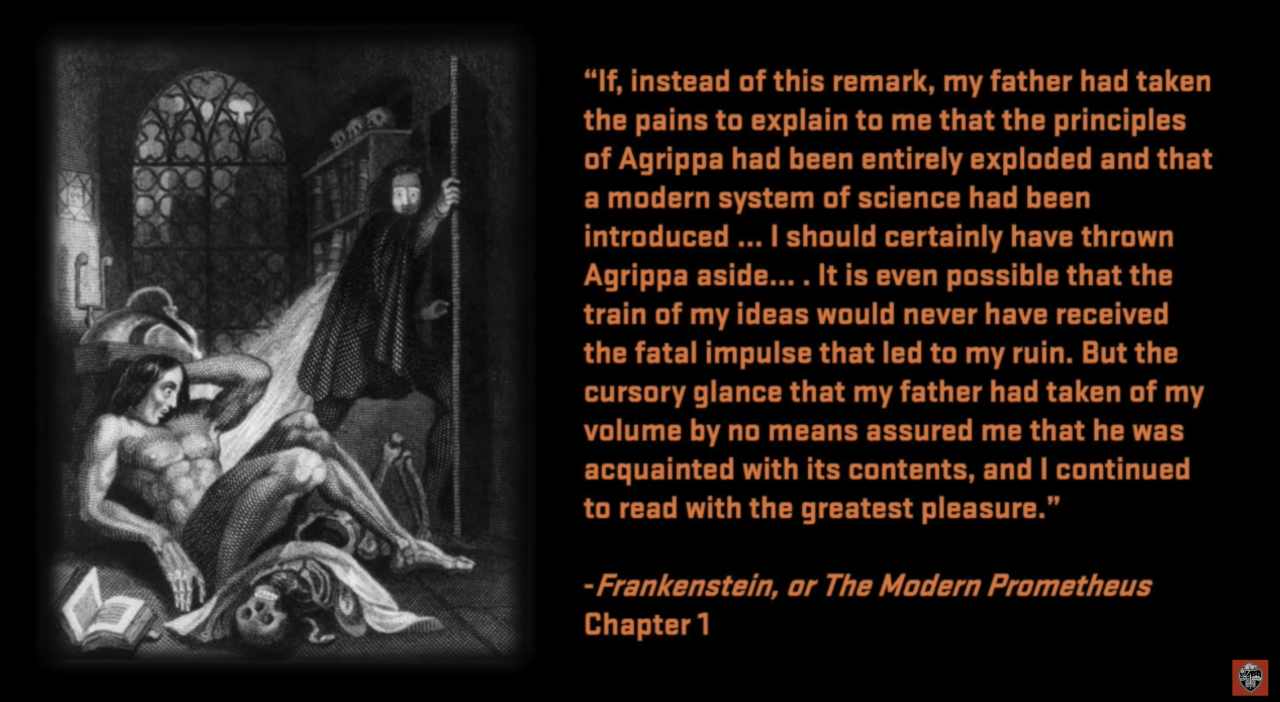 Here we have a very explicit bit of foreshadowing, something that clearly tells the reader to expect bad things to happen as a result of Victor’s early exposure to mystical treatises that don’t respect the boundaries and limitations of modern science (just as Victor will go on to transgress the boundaries of the possible by learning to reanimate dead matter).

But as I already mentioned, sometimes foreshadowing isn’t this obvious – sometimes it’s not something the narrator says, for example, but something that happens whose significance only becomes clear later:

And there’s a good example of this just a few pages later in Shelley’s novel, when Victor – still narrating his childhood remembrances – recalls a memory of watching “a most violent and terrible thunder-storm” (Broadview edition p. 69):

“As I stood at the door, on a sudden I beheld a stream of fire issue from an old and beautiful oak, which stood about twenty yards from our house; as so soon as the dazzling light vanished, the oak had disappeared, and nothing remained but a blasted stump. . . . The catastrophe of this tree excited my extreme astonishment, and I eagerly inquired of my father the nature and origin of thunder and lightning. He replied, ‘Electricity’ . . .” (Broadview edition pp. 69-70) 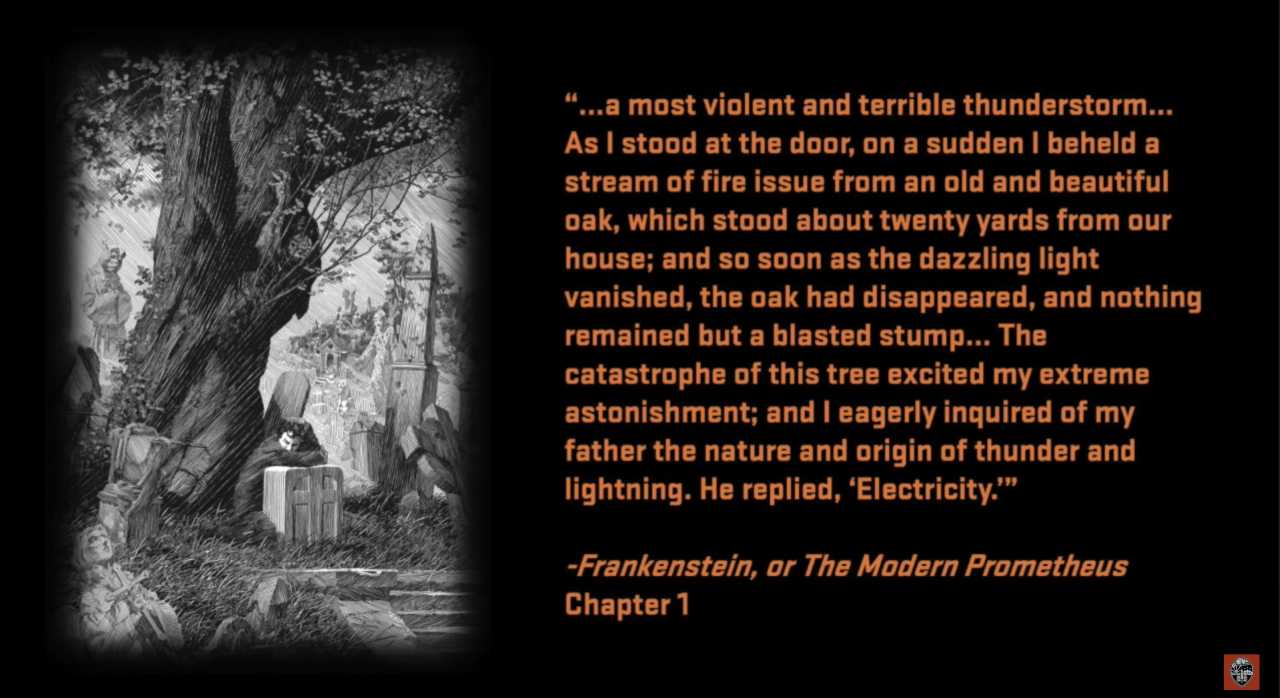 Shelley’s original readers would likely not have known what to make of this scene, besides recognizing the sublimity of nature’s power: but several chapters later in the novel, when Victor finally undertakes his terrible act of creation, it is strongly hinted that the power behind it is the same power that devastated the oak of his childhood: electricity.

When Victor describes his plan to “infuse a speak of being into the lifeless thing that lay at my feet” (p. 84), then, readers can think back to that original lightning strike and recognize its clever foreshadowing in a way that only comes into focus later, in what Victor calls “my workshop of filthy creation.” 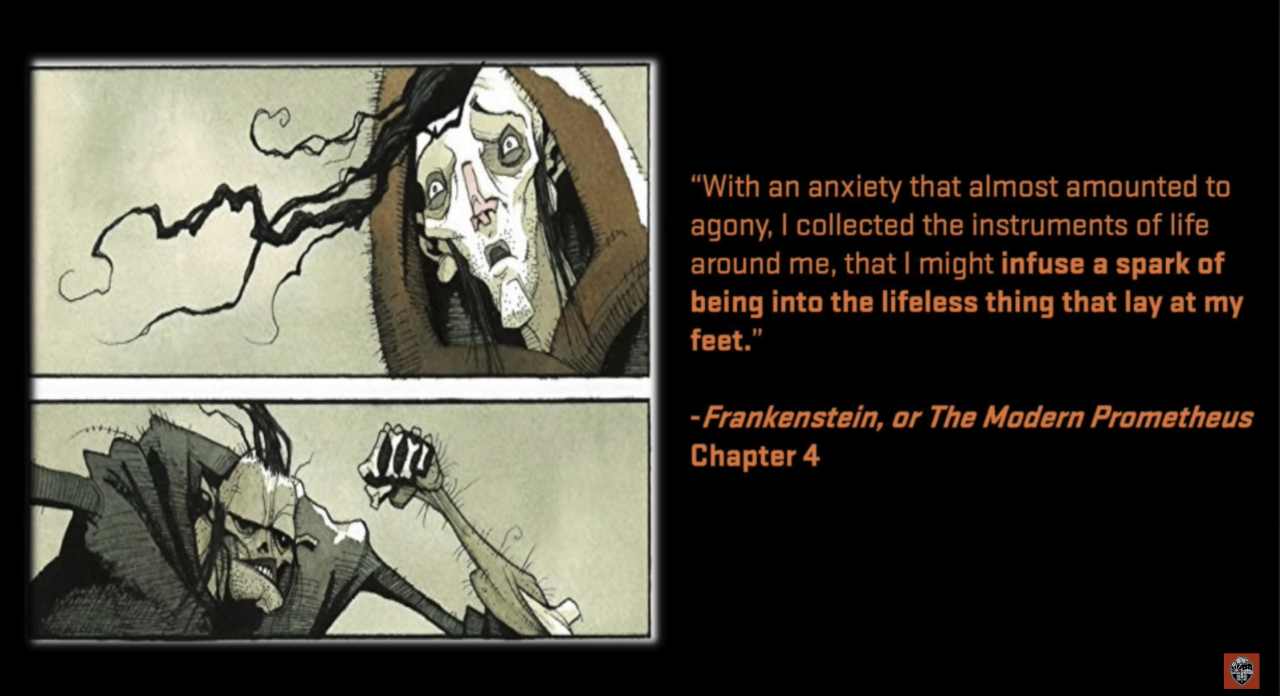 As with much foreshadowing, then, this is Mary Shelley’s way of telling readers, essentially, “Don’t say I didn’t warn you!”

Of course, foreshadowing is also frequently used in realist narratives too: any time a first-person narrator says something like “Little did I know that my decision to skip my morning coffee would come back to haunt me by mid-afternoon,” we’re in the realm of foreshadowing: even if all that’s being foreshadowed here is the fact that the narrator will fall asleep in an afternoon department meeting.

Note: this example is totally not based on personal experience!

Additional [Southern] Gothic stories that build foreshadowing into their narratives include Flannery O'Connor's "A Good Man is Hard to Find" and William Faulkner's "A Rose for Emily."