"What is Free Indirect Discourse?: A Literary Guide for English Students and Teachers

Seeing the world as another person sees it can be surprising, confusing, and delightful.  It can also show us the limitations in our own worldview, which may differ in substantial ways from our world as it really is. This is one of the reasons that we read fiction: stories offer us the opportunity to not only travel to different worlds and different time periods but also to inhabit different worldviews.

The easiest way to convey a character’s worldview is directly, through a first-person perspective.  This is a common point of view in which a character in the story also serves as its narrator.  First-person narrators are described in our “What is a Narrator?” and “What is an Unreliable Narrator?” videos, and both lessons give you a good sense of the differences between how these narrators see the world and how the world often is. If you haven’t seen these videos, you may want to check them out before we get into today’s lesson on free indirect discourse.

A second way to deliver a character’s worldview is indirectly from a third-person perspective. In this point-of-view, the narrator may choose to describe the thoughts of a given character from an outside perspective.  In the following passage from Flannery O’Connor’s short story “A Good Man is Hard to Find,” we get an indirect sense of the grandmother’s worldview as she prepares for an ill-fated family car trip to Florida: 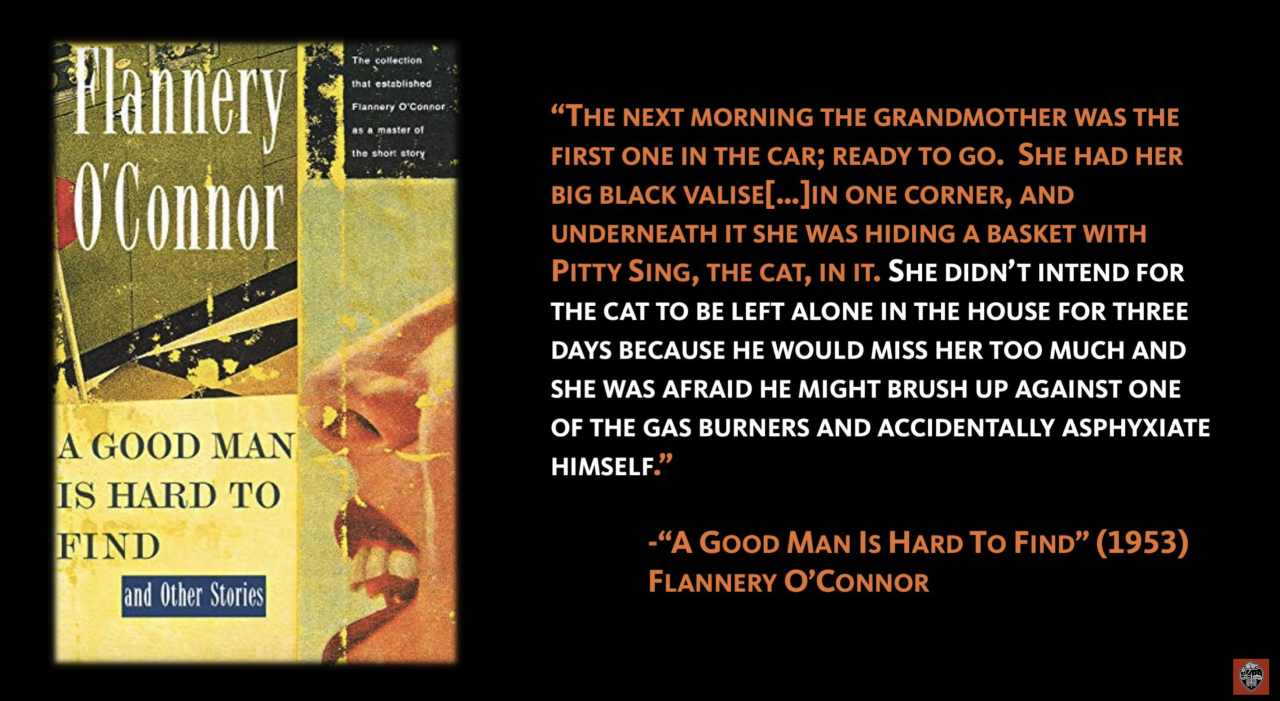 "The next morning the grandmother was the first one in the car; ready to go.  She had her big black valise[…]in one corner, and underneath it she was hiding a basket with Pitty Sing, the cat, in it. She didn’t intend for the cat to be left alone in the house for three days because he would miss her too much and she was afraid he might brush up against one of the gas burners and accidentally asphyxiate himself."

From this passage, you can get a sense of what the grandmother cares about (her cat) and how she values herself (her cat loves her). But you don’t really see her worldview in the same way that you see the worldview of a first-person narrator; instead, you have that worldview described for you by an intermediary: the third-person narrator.

Today, I want to talk to you about a fascinating point-of-view that blends first and third person perspectives: free indirect discourse.  In this point of view, a third-person narrator stops describing the worldview of a given character—telling us what he or she thinks—and instead presents that worldview as if it were the narrator’s.  As I like to think of it, free indirect discourse describes moments in a third-person narrative when the narrator becomes infected by the perspective of one of its characters. Here’s one example.  In John Steinbeck’s novella “The Red Pony,” the third chapter begins with the following description:

"In a mid-afternoon of spring, the little boy Jody walked martially along the brush-lined road toward his home ranch. Banging his knee against the golden lard bucket he used for school lunch, he contrived a good bass drum, while his tongue fluttered sharply against the teeth to fill in snare drums and occasional trumpets. Some time back the other members of the squad that walked so smartly from the school had turned into the various little canyons and taken the wagon roads to their own home ranches. Now Jody marched seemingly alone, with high lifted knees and pounding feet; but behind him there was a phantom army with great flags and swords, silent but deadly."

This passage starts in a traditional third-person way, in which an outside narrator describes the actions of a character—Jody. But the last line of this passage does something different.  Instead of describing to us what Jody is imagining—that he pretends he is marching in front of a “phantom army”—the narrator presents that army as if it were actually there—“silent, but deadly.” In other words, at this moment, we’re not seeing the world of a third-person narrator; we’re seeing the delightfully boyish worldview of Jody. 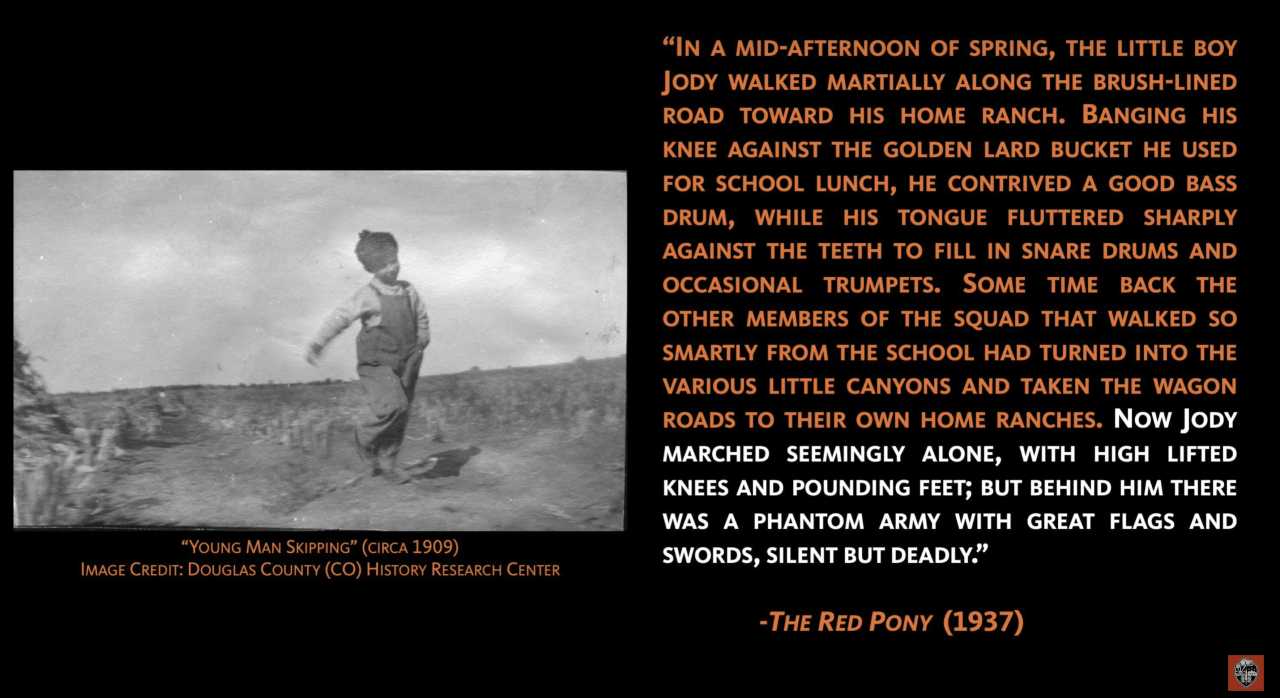 Free indirect discourse has been an important feature of Western narratives for over a hundred years, but spotting it is not always easy.  Consider this example: the opening to Joyce Carol Oates’ short story “Where Are You Going, Where Have You Been?”, which introduces us to a teenage girl named Connie.  See if you can spot the moments where the third person perspective becomes infected with her worldview and becomes free indirect discourse:

"Her name was Connie.  She was fifteen and she had a quick, nervous giggling habit of craning her neck to glance into mirrors or checking other people’s faces to make sure her own was all right. Her mother, who noticed everything and knew everything and hadn’t much reason any longer to look at her own face, always scolded Connie about it. “Stop gawking at yourself. Who are you? You think you’re so pretty” she would say. Connie would raise her eyebrows at these familiar old complaints and look right through her mother, into a shadowy vision of herself as she was right at the moment: she knew she was pretty and that was everything. Her mother had been pretty once too, if you could believe those old snapshots in the album, but now her looks were gone and that was why she was always after Connie."

This is, to say the least, a very strange narrative perspective.  The third-person narrator seems to think Connie’s mother “notices everything” and “knew everything”—but that’s, of course, impossible! The narrator also has a strange familiarity with the family’s photograph album and seems absolutely obsessed with beauty.  These strange details are signs that Oates has written this passage in free indirect discourse.  The narrator isn’t describing Connie’s worldview from an outsider’s perspective; she’s inhabiting Connie’s worldview. 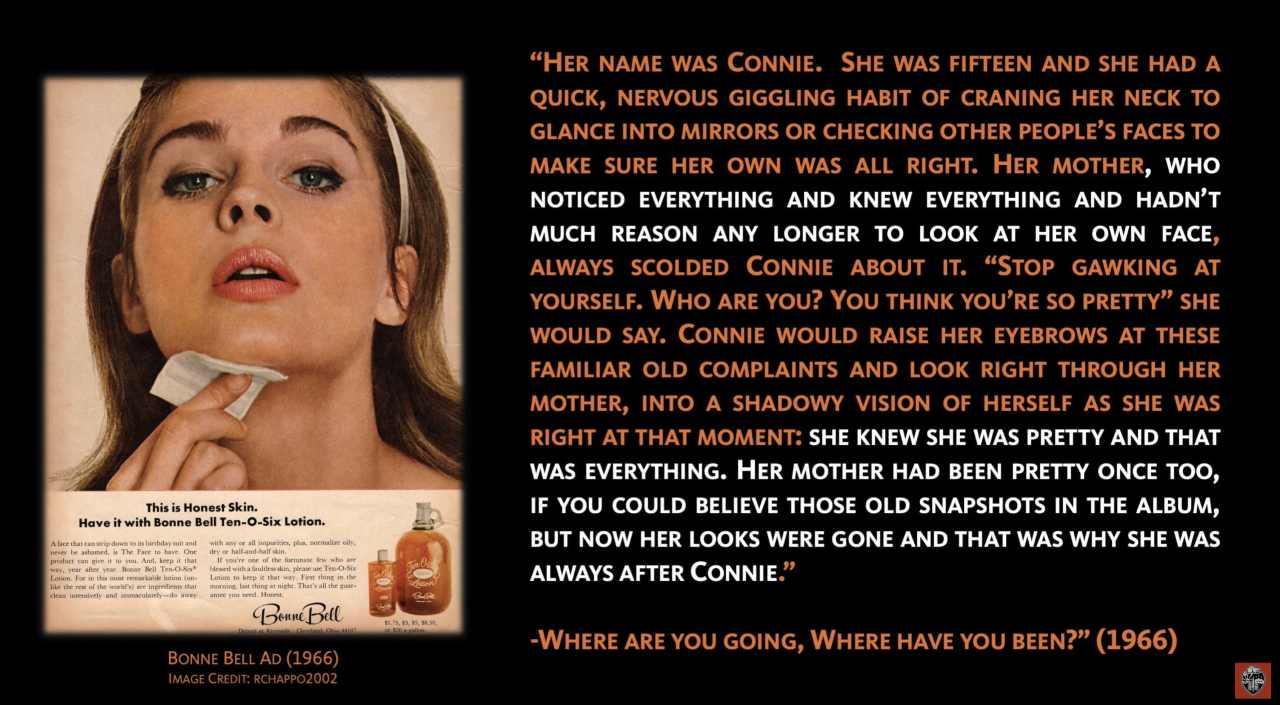 If this were a conventional third-person point of view, we’d get some division between the narrator and Connie, which might look something like this: “Connie thought she was pretty and she believed that was the most important thing she could be.”  But instead, with free indirect discourse, we see the world as Connie sees it, even from the third-person perspective: “She knew she was pretty and that was everything.”

So why would you want to identify this strange point-of-view while you are reading?  One reason is simply to know what the author is doing to provoke certain responses from readers.  When we read Jody’s and Connie’s stories, we’re immediately drawn to these characters, and we feel what they feel in large part because we are momentarily seeing the world as they are seeing it.

Another reason I like to identify free indirect discourse in stories is that this narrative mode, like first-person narration, is often ironic, introducing us to moments when the world and a given character’s worldview are at odds with one another.  These moments are fruitful places to analyze in your literary essays.  Let me leave you with one example from Toni Morrison’s novel Beloved that I hope you’ll explore on your own.

The vast majority of Beloved is told from a third-person point of view that will frequently drop into free indirect discourse to convey the worldview of the novel’s protagonist, Sethe, as she struggles with the aftereffects of slavery.  In chapter 16 of that novel, however, everything changes, and we drop into free indirect discourse of a very different kind—the worldview of a brutal slave owner whom the novel calls “Schoolteacher.” Inhabiting this worldview, seeing how that worldview dehumanizes the person whom we are closest to in this story, and having the central event of the novel described from this monstrous person’s perspective, produces a complex ironic reaction in readers that goes to the very heart of this incredibly important novel.

Our "What is Point of View" video offers another example of free indirect discourse in John Larison's discussion of "close third-person." Other examples suitable for high school instruction might be Leila Aboulela's short story "The Museum," Kate Chopin's very short story "The Story of an Hour," and William Faulkner's "Barn Burning." More advanced students can find F.I.D. being used in a manner similar to Morrison's Beloved at a few crucial moments in Colson Whitehead's novel Underground Railroad. Like Oates's and Morrison's stories, these other stories' complex ironies can be partially unpacked by attending to the free indirect discourse through which they are told.

Writing prompt: Identify moments of free indirect discourse in Kate Chopin's "The Story of an Hour." How do these moments shed light on the central conflict of the story?