What is an Unreliable Narrator? || Definition & Examples

"What is an Unreliable Narrator?" A Guide for English Students and Teachers

What is an Unreliable Narrator? Transcript (English and Spanish Subtitles Available in Video)

“I can see you out there staring at me. Your eyes are watching my every move. They stare with a look of judgment, as if you want me to fail. Your eyes are threatening, scrutinizing my every word, ridiculing my movements, laughing at my facial expressions. They are eyes my father looked at me from as he condescended to me and constantly criticized; he too always hoped that I would fail, just to prove him right. Your eyes bore into me like a knife, as if you are discovering a perverse, violent delight in seeing me as ridiculous.”

If I were a first-person narrator in a story that focused on my descriptions of other characters and the events of the plot, what I just said would be a good example of the literary technique  called the unreliable or untrustworthy narrator. Notice that, from the details of my perceptions, I’ve revealed some issues regarding my relationship with my father; and even more, I’ve projected these onto you as if they were the objective truth of how you’re watching me. My perceptions of you would now become the reality of the narration of my story, but they are most likely far from the reality of how you are looking at me now on your screen. As a narrator, I would not be attempting to offer my audience objective facts of a recognizable reality, but rather my highly-colored perceptions and interpretations, given without any third-party or factual corroboration to demonstrate these as accurate, or even to suggest my awareness of my personal bias.

As a reader of any story (or watcher in this case) we undergo what is called a willing suspension of disbelief as we read so as to attempt to understand the narration, trust the narrator, and interpret why the story is being told toward some implied politics, idea, or theme. But unlike the classic omniscient (all-knowing) third-person narrator, the first-person unreliable narrator never suggests they are like the God of their world by offering you a mutually agreed upon objectivity (Once upon a time, these people did this) but rather gives you his/her own view of what happened and why it appears so important that it needed to become a story.  In this way, an unreliable narrator’s version of events and characters in the story will also build to reveal, simultaneously, his/her own personal prejudices, anxieties, fears, tastes, delusions, and even beliefs. The descriptions will often also imply the family and cultural environments that shaped his/her views, and so contributed to how he/she perceives and makes meaning from the world around them.

Pretend for a moment that you are an author who wants to write a first-person story that employs this mode of narration. Part of the reason you chose this narrative style is not only because you want your audience to understand that any person’s reality is in part always subjective (as in the famous phrase “beauty is in the eye of the beholder), but that you want your audience not only to grasp how the narrator’s thoughts and descriptions become how he or she sees the world, but also why he/she sees it that way. By way of placing into the mouth of your narrator noticeable repetitions, exaggerations, patterns of thought, and especially symbolic perceptions, your story, through this narrator, would become as much about the narrator’s psychology as it is about the events he/she is unfolding. To achieve this you might make the narrator give background on who they are, where they’ve grown up or lived, and why the particular event they are recounting has compelled them to tell the story. While a reader listens to that narrator and notices these patterns, he/she themselves might begin to take on the role of an arm-chair therapist, listening for clues and markers in the narration that signal why the narrative voice perceives and describes things the way they do.

This first-person unreliable narrator became popular in Western literature during the Modernist period from the end of the 19th (1890’s) through the 20th century.  An influential Modernist writer from Ireland, James Joyce, employed the technique in some of his earliest short stories. Later in his career, and along with other American Modernist writers such as Gertrude Stein, William Faulkner, and Ralph Ellison, he pushed the technique further into a different kind of first-person narration called Stream-of-Consciousness, which attempts to get down on paper the ebb and flow of thoughts, feeling, impulses, memories, and perceptions/interpretations that go on in each of our minds continuously during our waking hours. In one of Joyce’s most highly anthologized pieces of short fiction, entitled “Araby,” he has a mid-adolescent boy as an unreliable narrator tell the story of a few days during which he becomes obsessed, with and eventually talks to, the girl of his first sexual crush, who is the older sister of one of his good friends. The boy has been born and raised a strict Catholic in 19th century Ireland, and when Joyce has him relate the first time he views the young women in isolation, the narrator tells us:

She was waiting for us, her figure defined by the light from the half opened door.

at her. Her dress swung as she moved her body and the soft rope of her hair tossed from

The second time he sees her he tells us:

She held one on of the spikes [of the railing], bowing her head towards me. The

light from the lamp opposite our door caught the white curve of her neck, lit up

the hair that rested there, and, falling, lit up the hand upon the railing. It fell over

one side of her dress and caught the white border of a petticoat, just visible as she 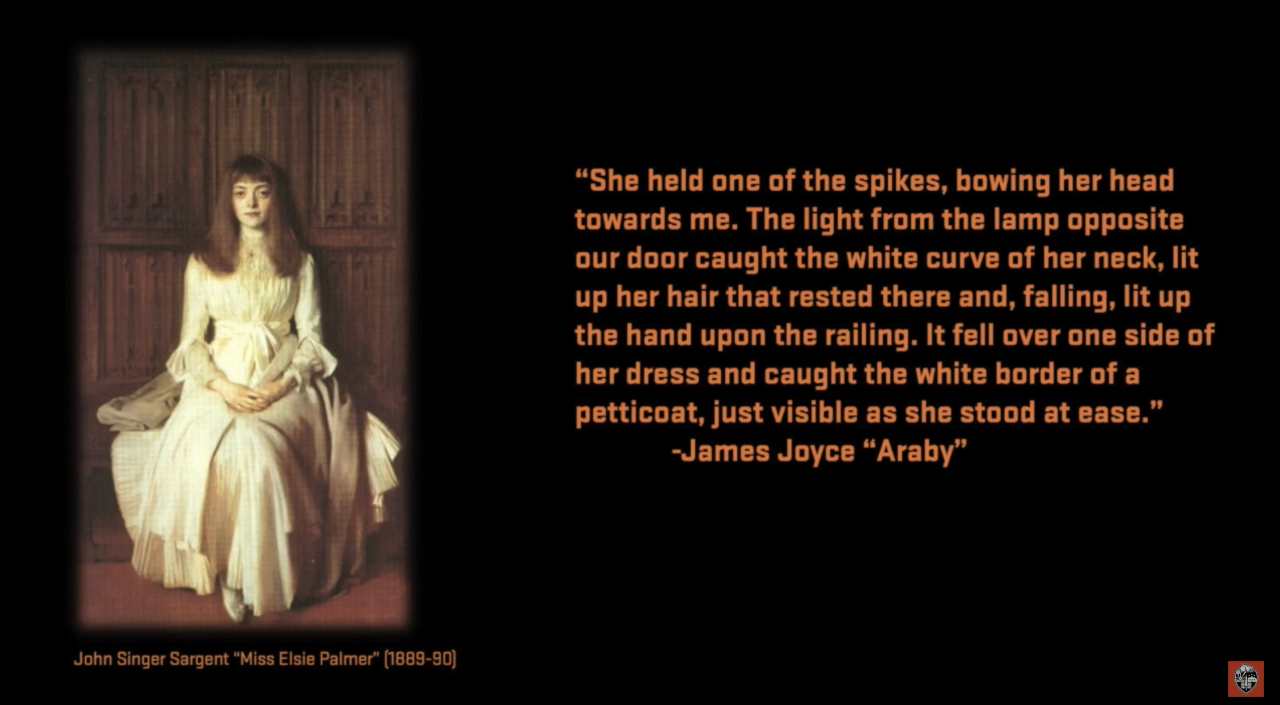 In both passages, the boy’s perceptions of the girl suggest he sees her symbolically like an angel, back-lit by a pure white light, as in the way he would have been taught to think about women through images of the Virgin Mary. But, he also notes her swaying hair, her white neck, and just the edge of her undergarment (her petticoat). As we read these passages, Joyce gives us clues to understand that the boy’s perception of the girl has been shaped by his culture’s religious-based understanding of femininity as it is coming into conflict here with his earliest sexual impulses. The boy does not fully understand this, even though he is the narrator of the story, but a perceptive reader can draw these conclusions from the ironic distance he gains by reading the narration carefully in this manner. In this way, the first-person unreliable narrator mode creates an psychological portrait of the narrator that is shared between the author and the reader, but is often never fully recognized by the character him/herself.

Other videos in the Oregon State Guide to English Literary Terms that grapple with unreliable narrators include "What is a Narrator?", which addresses Scout in Harper Lee's To Kill a Mockingbird, and "What is Irony?", which addresses Montresor in Edgar Allan Poe's "Cask of Amontillado." It is also addressed in our "What is Point of View?" video, which insists that we should always ask WHY a person is telling us his/her/their story. For the poetic equivalent of the unreliable narrator, see our "What is a Dramatic Monologue?" video. Another good example of an unreliable narrator is Sherwood Anderson's "Death in the Woods," because the narrator directly wonders why he knows certain elements of the plot that he should not know.
Writing Prompt: What moments in Anderson's story indicate that the young man who tells it is an unreliable narrator? Why do you think he telling us this story? How does Anderson's "unreliable narrator mode create an psychological portrait of the narrator that is shared between the author and the reader, but is often never fully recognized by the character him/herself?"