What is Irony? | Definition & Examples

"What is Irony?": A Guide for English Students and Teachers

What is Irony? - Transcription (English and Spanish Subtitles Available in the Video. Click HERE for the Spanish transcript)

As we transition from childhood into adulthood, we begin to realize that things, people, and events are often not what they appear to be.  At times, this realization can be funny, but it can also be disturbing or confusing.  Children often recoil at this murky confusion, preferring a simple world in which what you see is what you get.  Adults, on the other hand, often LOVE this confusion-- so much so that we often tell ourselves stories just to conjure up this state.  Whether we run from it or savor it, make no mistake: “irony” is a dominant feature of our lives.

In simplest terms, irony occurs in literature AND in life whenever a person says something or does something that departs from what they (or we) expect them to say or do. Just as there are countless ways of misunderstanding the world [sorry kids], there are many different kinds of irony.  The three most common kinds you’ll find in literature classrooms are verbal irony, dramatic irony, and situational irony.

Verbal irony occurs whenever a speaker or narrator tells us something that differs from what they mean, what they intend, or what the situation requires.  Many popular internet memes capitalize upon this difference, as in this example. 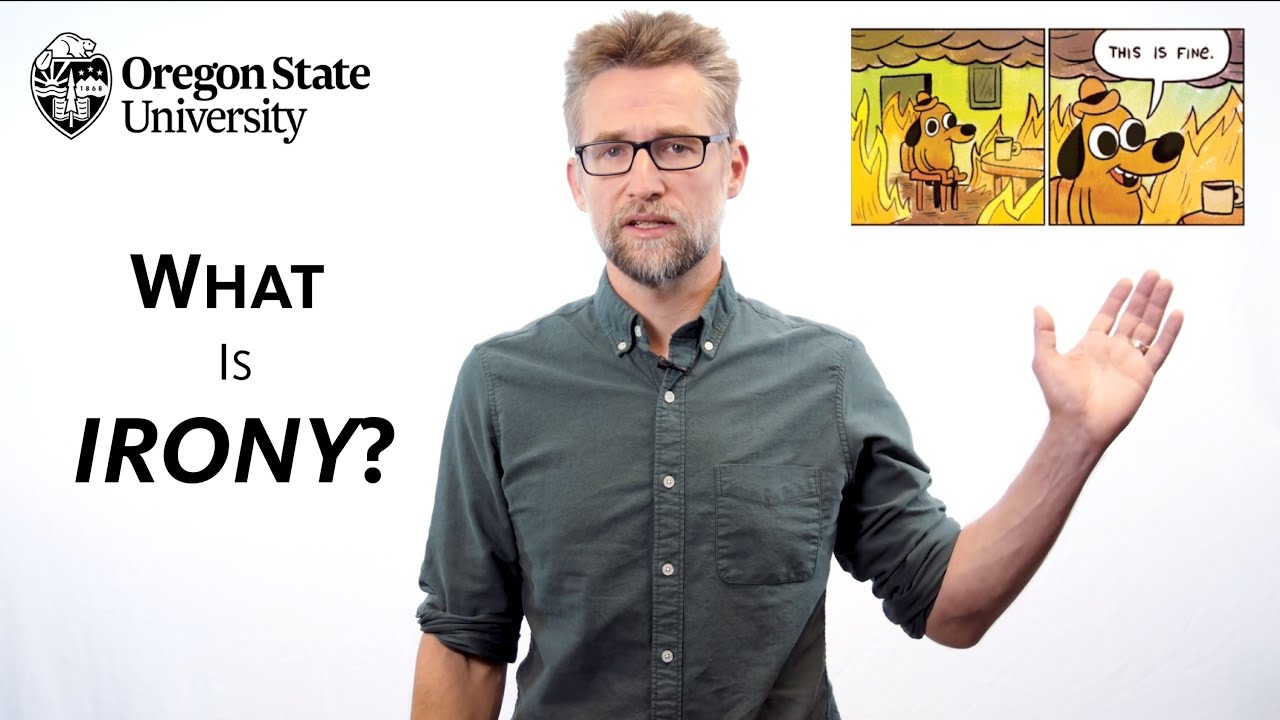 Edgar Allan Poe’s short story “The Cask of Amontillado” offers a more complex example of verbal irony.  In the story, a man named Montresor lures another man named Fortunato into the catacombs beneath his house by appearing to ask him for advice on a recent wine purchase.  In reality, he means to murder him.  Brutally.  By walling him up in those catacombs [spoiler alert]!

As the two men travel deeper underground, Fortunato has a coughing fit.  Montresor appears to comfort him in the following richly ironic exchange:

“Enough,” [Fortunato] said, “the cough is a mere nothing; it will not kill me.  I shall not die of a cough.” 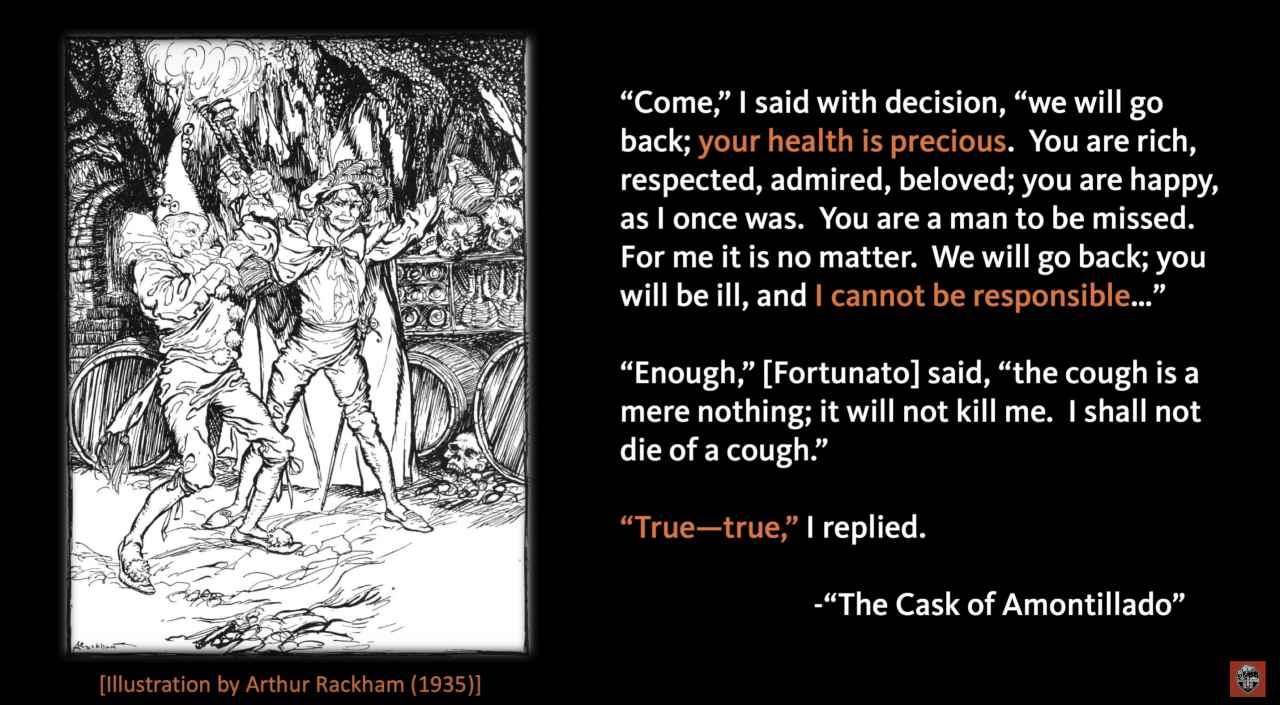 If we only paid attention to the appearance of Montresor’s words, we would think he was genuinely concerned with poor Fortunato’s health as he hacks up a lung.  We would also think that Montresor was trying to be nice to Fortunato by agreeing with him that he won’t die of a cough.  But knowing Montresor’s true intentions, which he reveals at the start of the story, we are able to understand the verbal irony that colors these assurances.  Fortunato won’t die of a cough, Montresor knows, but he will definitely die.

This scene is also a great example of dramatic irony.  Dramatic irony occurs whenever a character in a story is deprived of an important piece of information that governs the plot that surrounds them.  Fortunato, in this case, believes that Montresor is a friendly schlub with a terrible wine palette and a curious habit of storing his wine near the dead bodies of his ancestors. The pleasure of reading the story stems in part from knowing what he doesn’t—that he’s walking into Montresor’s trap.  We delight, in other words, in the ironic difference between our complex way of understanding of the world and Fortunato’s simple worldview.

Finally, the story also includes, arguably, a great example of situational irony.  As its name suggests, situational irony occurs when characters’ intentions are foiled, when people do certain things to bring about an intended result, but in fact produce the opposite result.  At the start of the story, Montresor tells his readers that his project will succeed only if he “makes himself felt as such to him who has done the wrong.” 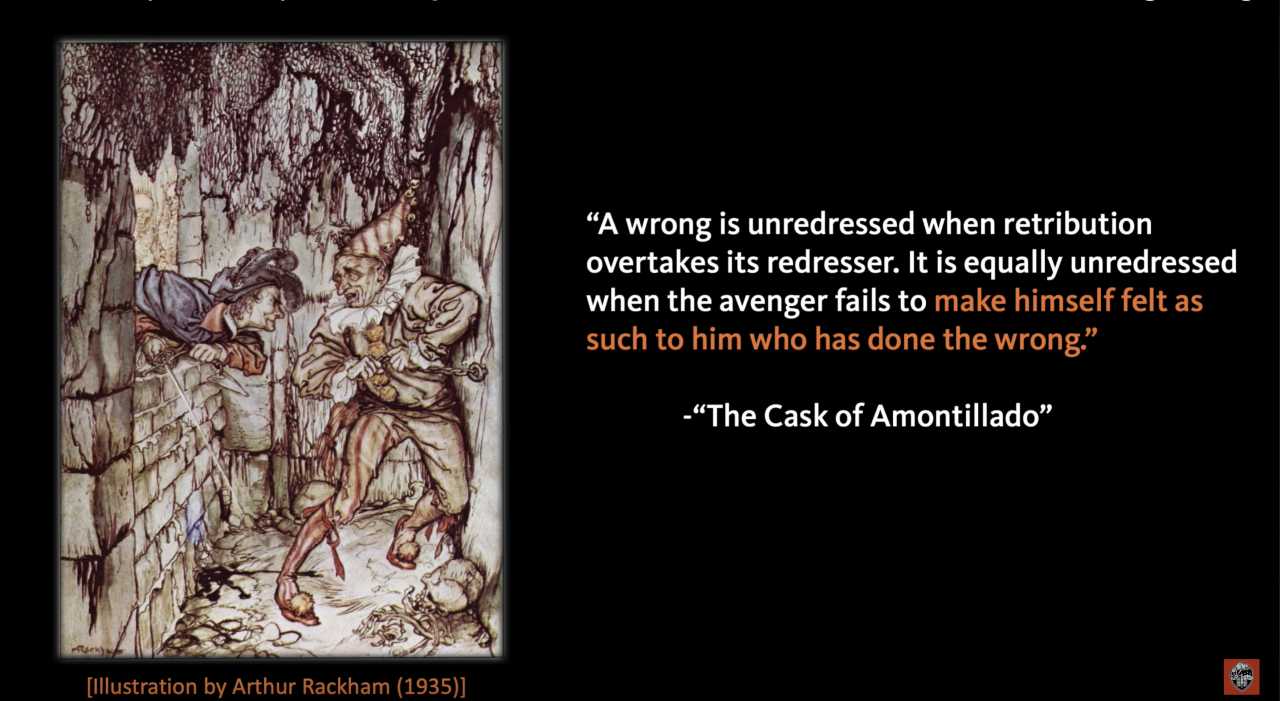 In other words, Fortunato must not only know that he has been tricked but also why he was tricked and why he must die.  If this is Montresor’s intention, however, he goes about it in a rather strange way, offering Fortunato countless sips of wine on their trip into the catacombs that gets his antagonist pretty drunk.  By the end of the story, Montresor has certainly got away with the crime, but it’s far from certain that Fortunato (or even Montresor) knows why he is given such a terrible death.

So why does Montresor insist on telling us that his story is a success?  One reason might be that he is anxious about the situational irony that envelopes his story and wants to cover the reality of that irony with a simple appearance of triumph.  He’s gotten away with it, and Fortunato knows why he must die.  If readers push back against this desired outcome, testing it against Fortunato’s confusion at being chained to a wall and bricked into place, they travel further than even Montresor is willing to go into the murky catacombs of irony.

Kate Chopin's story "The Story of an Hour" offers students many opportunities to discuss different kinds of irony. These ideas are indirectly discussed in our "What is Imagery?" video.  Many other literary terms can be used for ironic effect, including Understatement, Free Indirect Discourse, Dramatic Monologue, and Unreliable Narrator. Yiyun Li's short story "A Thousand Years of Good Prayers" is another story suitable for this kind of analysis.

Writing Prompt #1: Identify examples of verbal irony, dramatic irony, and situational irony in Chopin's or Li's story. When you have made these determinations, explain how they operate together to convey meaning in the story.

Writing Prompt #2: See the prompt in our "What is a Sonnet?" video.