What are Assonance and Consonance? | Definition & Examples

"What are Assonance and Consonance?": A Literary Guide for English Students and Teachers

What are Assonance and Consonance? Transcript (English and Spanish Subtitles Available in Video)

First: WHAT sounds are being repeated.  Rhyme, as you may know, is the repetition of sounds at the end of a given pair of words, and these sounds usually combine vowels and consonants. For example, door rhymes with floor not only because of the r at the end, but also the long -o. “oor.”

When we use the terms assonance and consonance, we’re calling attention to only one of these two kinds of sounds—either the consonants or the vowels. So why would we do that?

Technically, rhyme is a kind of assonance, but in practical terms, when we call something assonance, we often mean that only the vowel sound repeats between words. Along similar lines, when we call something consonance, we mean that only the consonant sounds repeat.  Here’s a simple, silly example: “euphonous fish.” Both words in this phrase contain the repeating -f sound “euPHonous Fish,” but the vowel sounds, you’ll notice, aren’t the same. As such, we have consonance but not rhyme.

Second up: WHERE within the words are the sounds being repeated? With rhyming pairs, the common sound occurs at the end of each word. In the case of door and floor, the beginning sounds differ (d and fl) but the final sounds match (oor), creating the rhyme. With assonance and consonance, however, the recurring sound patterns can occur anywhere in the associated words—at the beginning, in the middle, or at the end.  The phrase “euphonous fish” is an example of consonance because the -f sound repeats from word to word, even though the sound doesn’t necessarily repeat in the same spot in both words.

Finally: WHERE does the repetition occur in a poem?  In poetry, rhyming words usually occur at the end of poetic lines, creating complex patterns that knit lines (and indeed often entire poems) together. Instead of structuring the entirety of a poem or stanza, however, assonance and consonance usually show up irregularly in certain moments of a poem.  In this way, assonance and consonance create temporary, ephemeral patterns in a given line or phrase that dissipate as quickly as they emerge.

He hung a grunting weight,

and homely. Here and there
his brown skin hung in strips
like ancient wallpaper,
and its pattern of darker brown
was like wallpaper:
shapes like full-blown roses
stained and lost through age.
He was speckled with barnacles,
fine rosettes of lime,
and infested
with tiny white sea-lice,
and underneath two or three
rags of green weed hung down.

As you see, there isn’t any end-rhyme here, but the poem is undoubtedly musical.  This is due in part to the consonance in the poem.  Consider the opening line, which repeats the -ng sound with hung and grunting.  Or the fourth line’s phrase “brown skin hung” n-n-n. Or the tenth line’s repetition of the hard -k sound “speckled with barnacles.” These repetitions AREN’T internal rhymes--the vowel sounds around the consonants aren’t always the same and this repetition doesn’t always occur at the ends of words—but they operate in a way similar to rhyme.  They help Bishop convey the beauty as well as strangeness of this encounter with a fish. 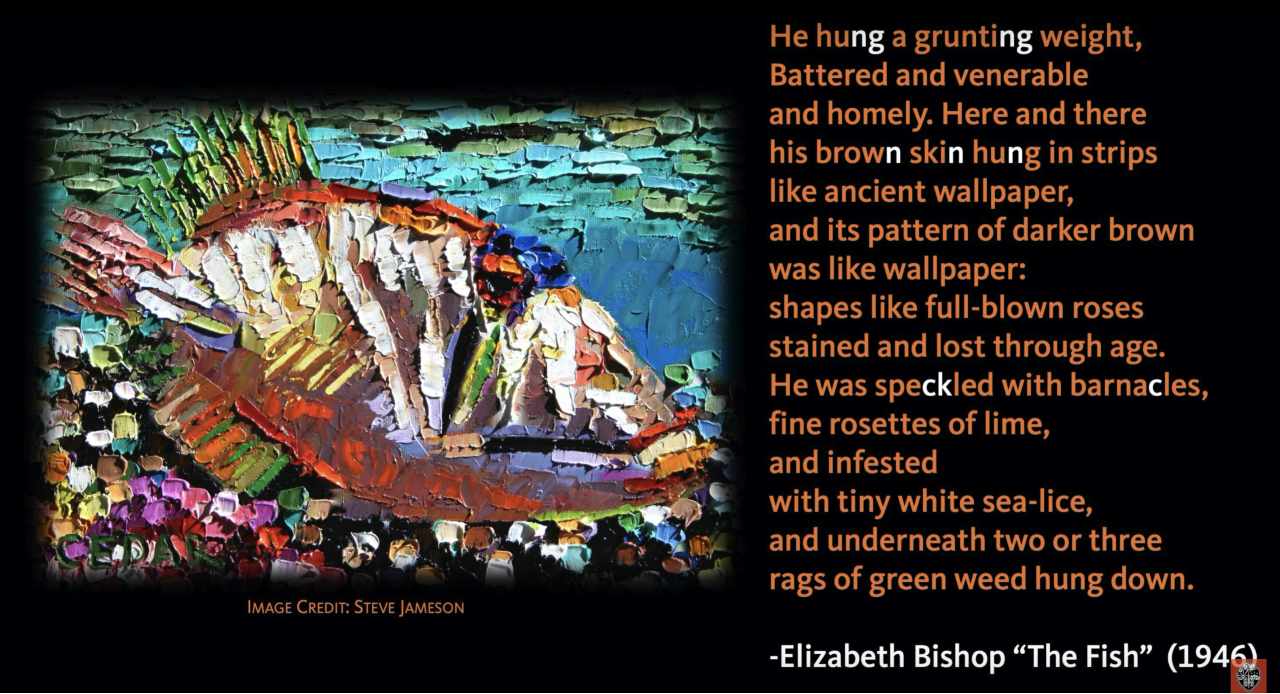 There is also a bit of assonance in these lines.  Consider the 13th line, in which Bishop’s speaker repeats a series of hard -i sounds, though again, not in a manner of internal rhyme: “tiny white sea-lice.” Or the alternation of hard -a and hard -o sounds in the lines:

…wallpaper:
shapes like full-blown roses
stained and lost through age. 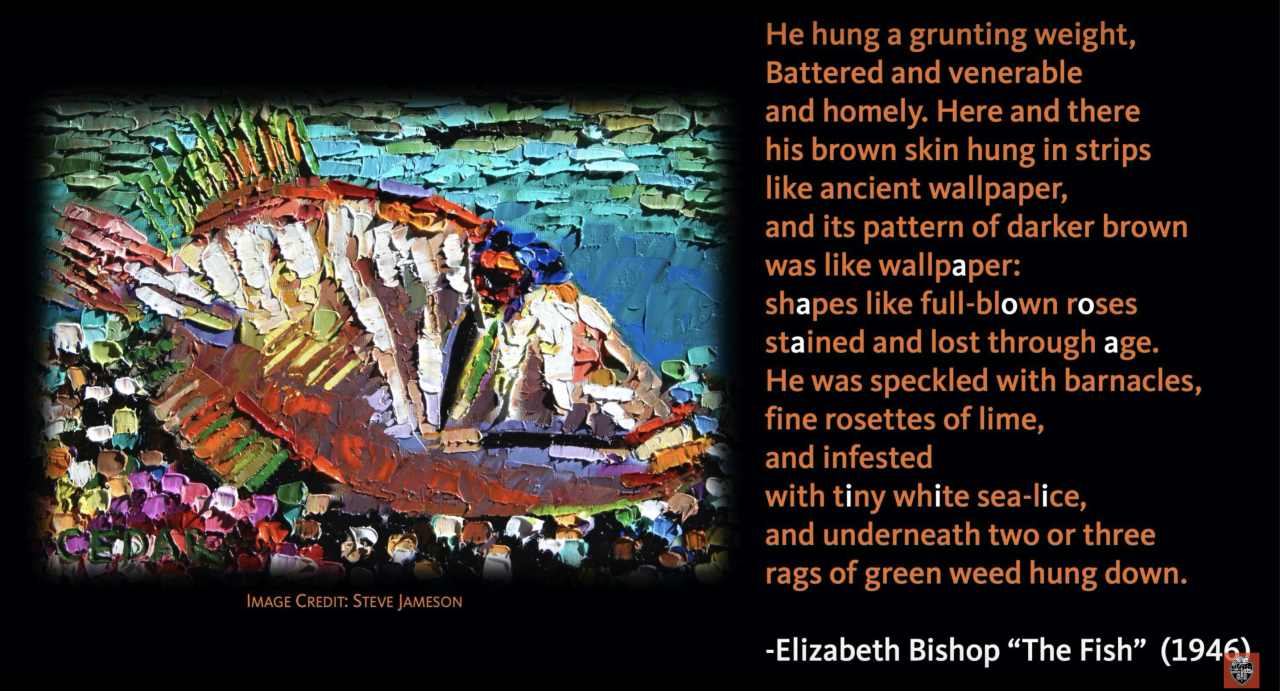 Again, there isn’t a regular pattern here.  Instead, we’re given certain fragments of melodious or euphonious phrases that help us to structure the way we sound out the poem.

Let me leave you with one final, complex example of consonance and assonance that will help you to distinguish these terms from rhyme. Here are the opening lines to Matthew Arnold’s 1867 poem “Dover Beach.”

The sea is calm tonight.

The tide is full, the moon lies fair

Upon the straits; on the French coast the light

Gleams and is gone; the cliffs of England stand,

Glimmering and vast, out in the tranquil bay.

Come to the window, sweet is the night-air!

Only, from the long line of spray

Where the sea meets the moon-blanched land,

Listen! you hear the grating roar

Of pebbles which the waves draw back, and fling,

At their return, up the high strand,

Begin, and cease, and then again begin,

With tremulous cadence slow, and bring

The eternal note of sadness in.

In these lines, the sound patterns of Arnold’s words mimic the waves of the sea as they crash against the beach.  They do so because of rhyme, sure.  We get rhymes between lines 2, 6, and 9 and we get a separate set of rhymes in lines 8 and 11 and in lines 10 and 12.  We also get a CRAZY amount of internal rhyme in line 10: “Begin, and cease, and then begin again.”

But Arnold’s use of assonance and consonance also contributes to the noise of the sea. In the second line, a little sonic pattern is established in the repetition of -f sounds: “the tide is full, the moon lies fair.”  Or, in the fourth line, a little pattern emerges in the repetition of “gleams and is gone”: the pattern emerging and then dissipating in the same way that the light emerges and then disappears. 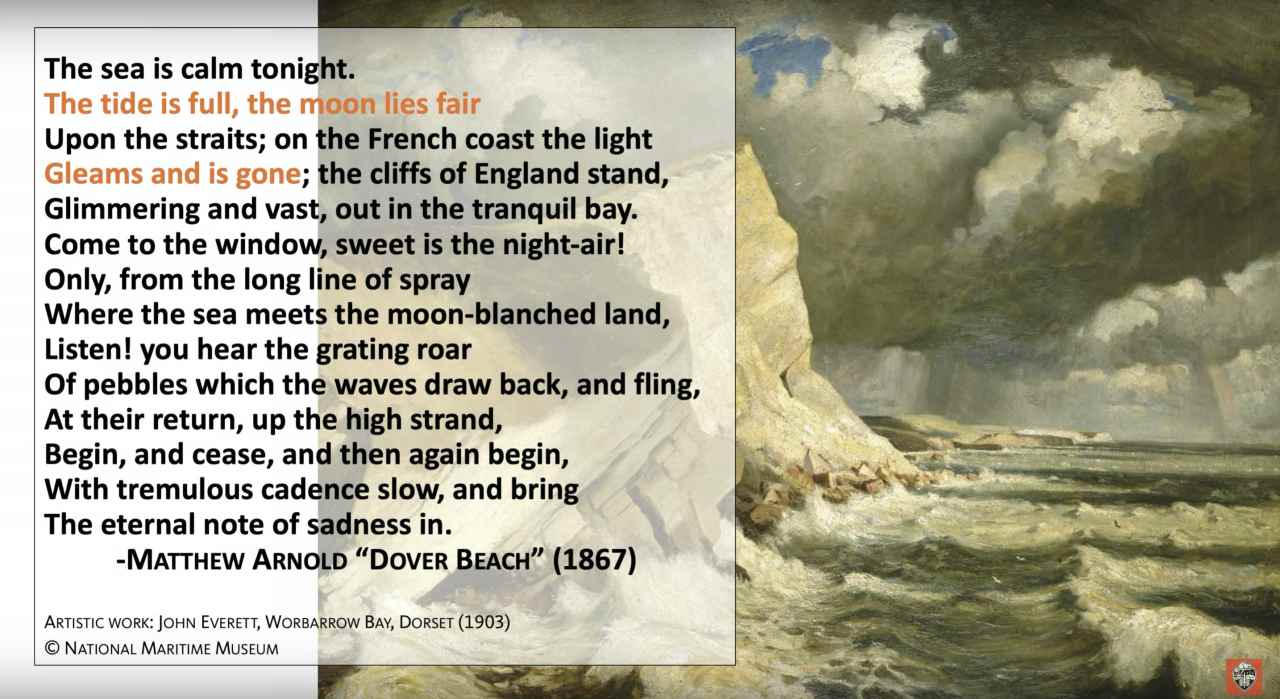 We also get a bit of assonance packed in alongside the consonance.  In line 8, for example, we get the repetition of the short-a and the -l sounds in “moon-blanched land.” This assonance, again, isn’t rhyme, but it performs the same function as rhyme, conveying the effect of the moon casting its light (and, here, its sound) upon the land. 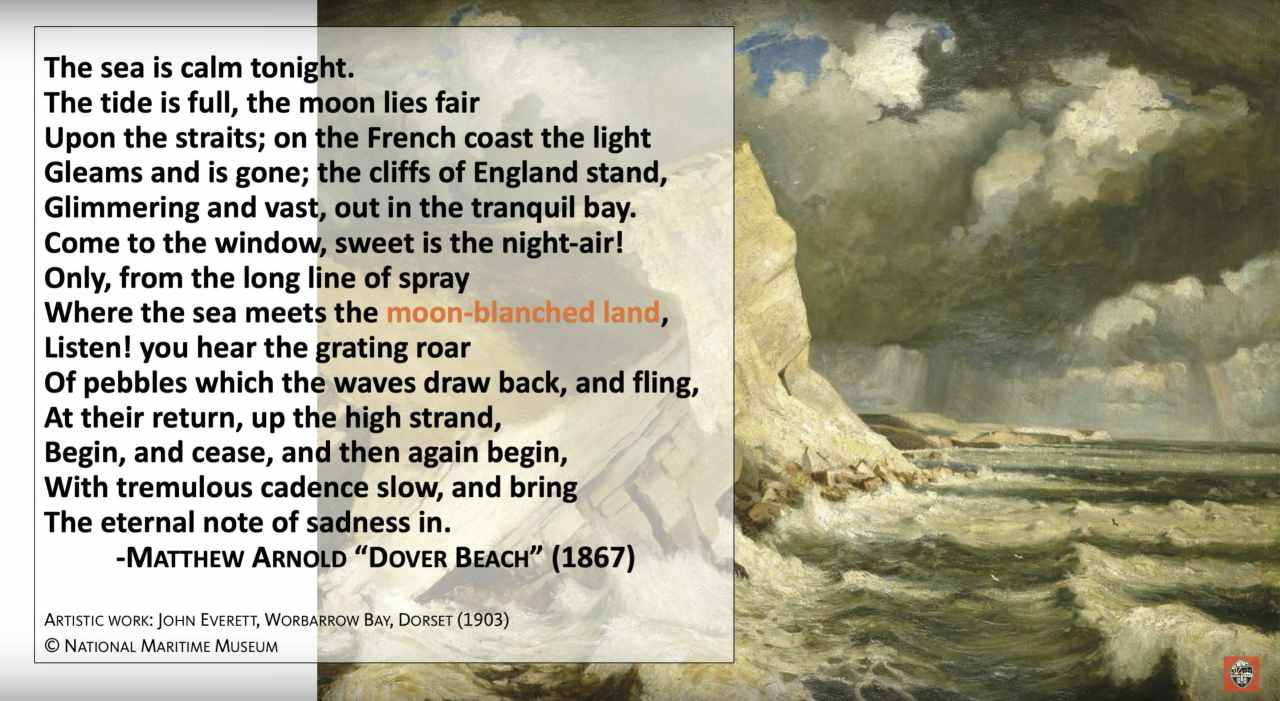 As Arnold’s and Bishop’s sound experiments suggest, repetition in poetry is not always as regular or as simple as rhyme and meter. At certain moments, other, more subtle repetitions emerge to challenge and delight us as we sound out the poetry we love.