What is Poetic Meter? || Definition & Examples

"What is Poetic Meter?": A Literary Guide for English Students and Teachers

In both cases, the reason that the first example works is because my pronunciation matches the poetic meter of the words in each line.  The other readings I’ve read in the opposite meter, and they sound funny and unnatural.  So how do we describe this difference?

The most common way to do so in English is to follow the stresses in each phrase of the line.  As you probably know, words in the English languages are composed of a set of stressed and unstressed syllables.  In poetry, these syllables are often arranged to create repeating, sonic units—what literary critics call “feet”--that compose the meter of a given poem. 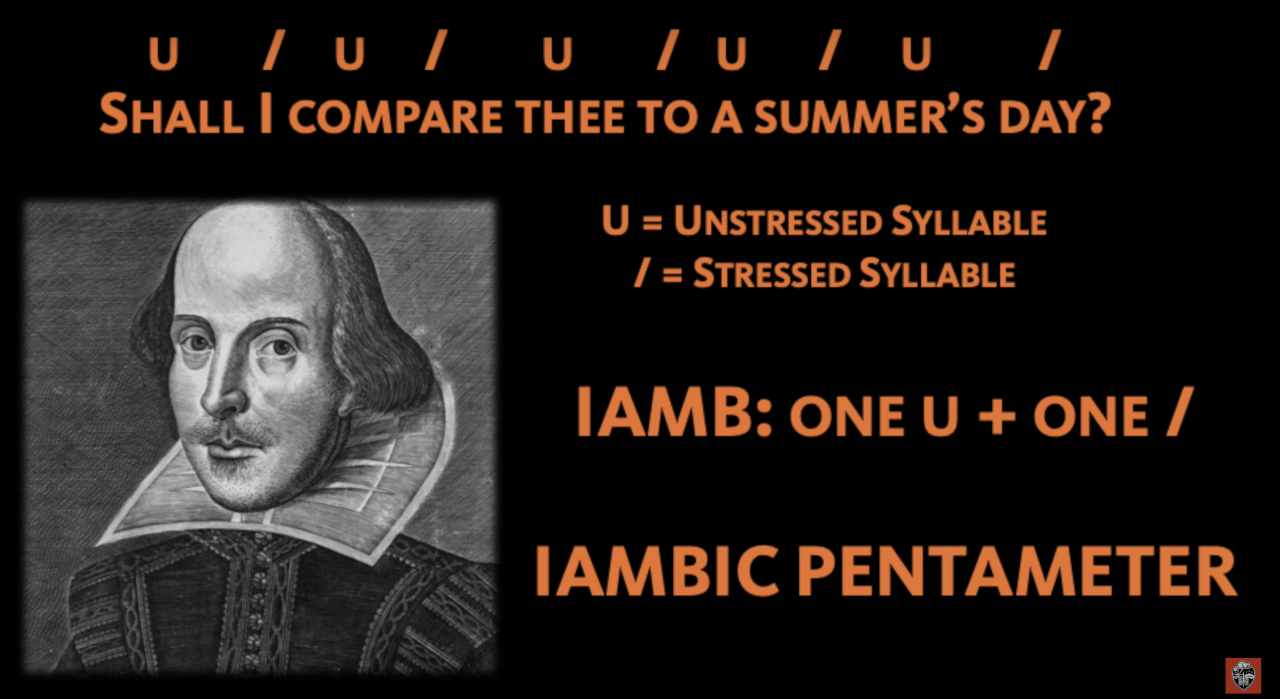 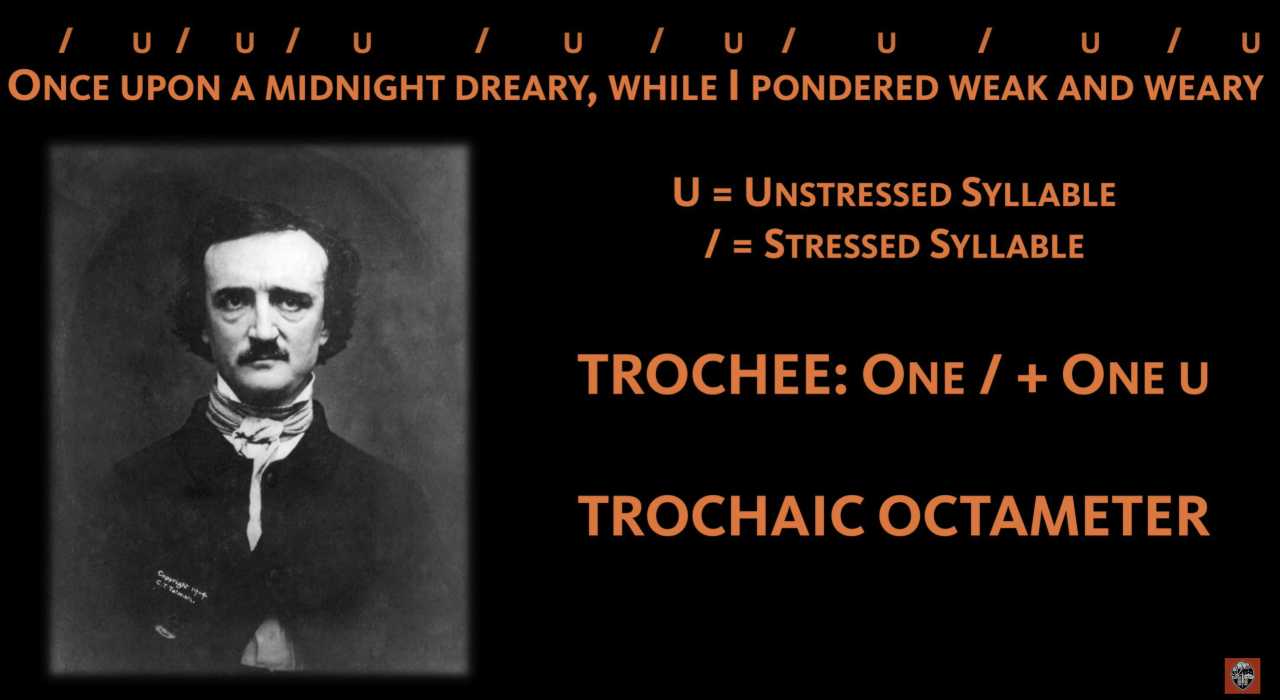 Iambs and trochees are two of the most common types of poetic feet, so you’ll definitely want to look for them when reading poetry.  But poems can also use metrical units of three syllables.  Consider the following opening lines from Clement Clarke Moore’s “A Visit from St. Nicholas”: “Twas the night before Christmas when all through the house, not a creature was stirring, not even a mouse.” Here, the meter pattern is: unstressed unstressed stressed, unstressed unstressed stressed.” (“Twas the NIGHT before CHRISTmas.”) This unit is called an anapest, and there are 4 of them in each line here.  The prefix for 4 is “tetra”, so the meter is anapestic tetrameter. 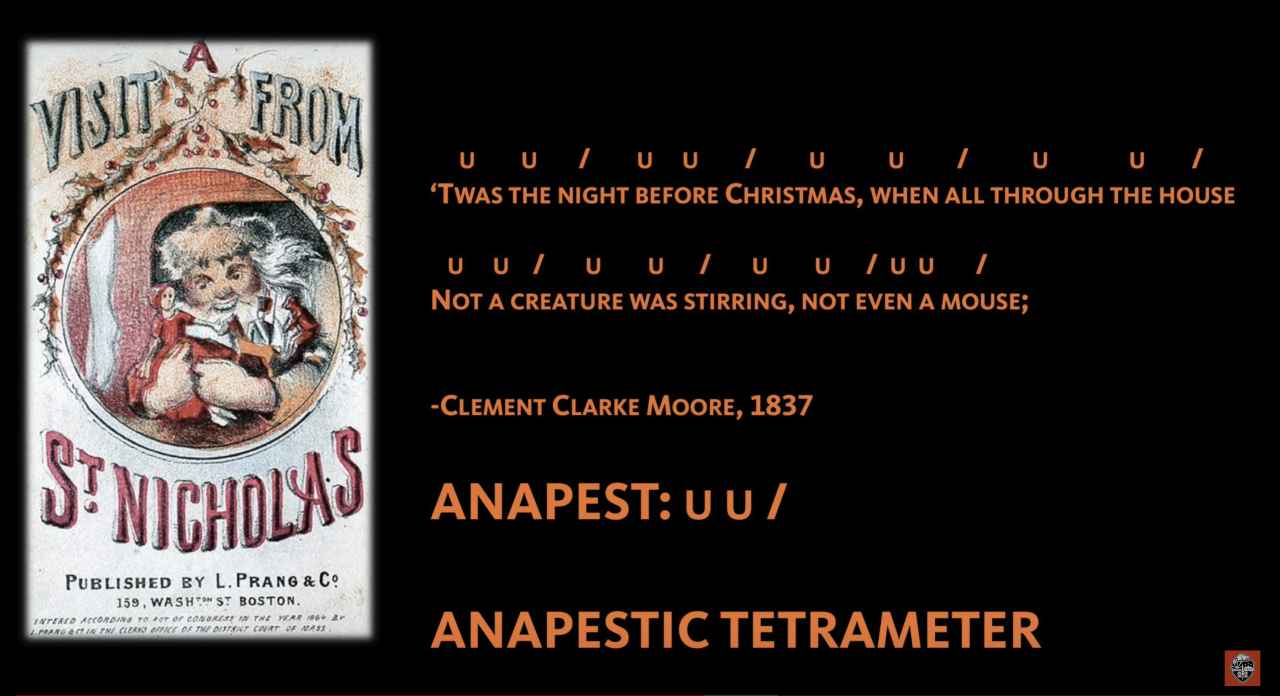 The final common metrical foot is the opposite of an anapest: a dactyl, which is a 3-syllable unit that starts with a stress and ends with two unstressed syllables.  The Greek poet Homer adopts this form in his great epic poems The Iliad and The Odyssey, and poems in English that adopt the dactylic form often allude to this legacy.  For example, Henry Wadsworth Longfellow uses dactylic hexameter in his epic poem “Evangeline,” which begins: “This is the forest primeval, the murmuring pines and the hemlocks.” 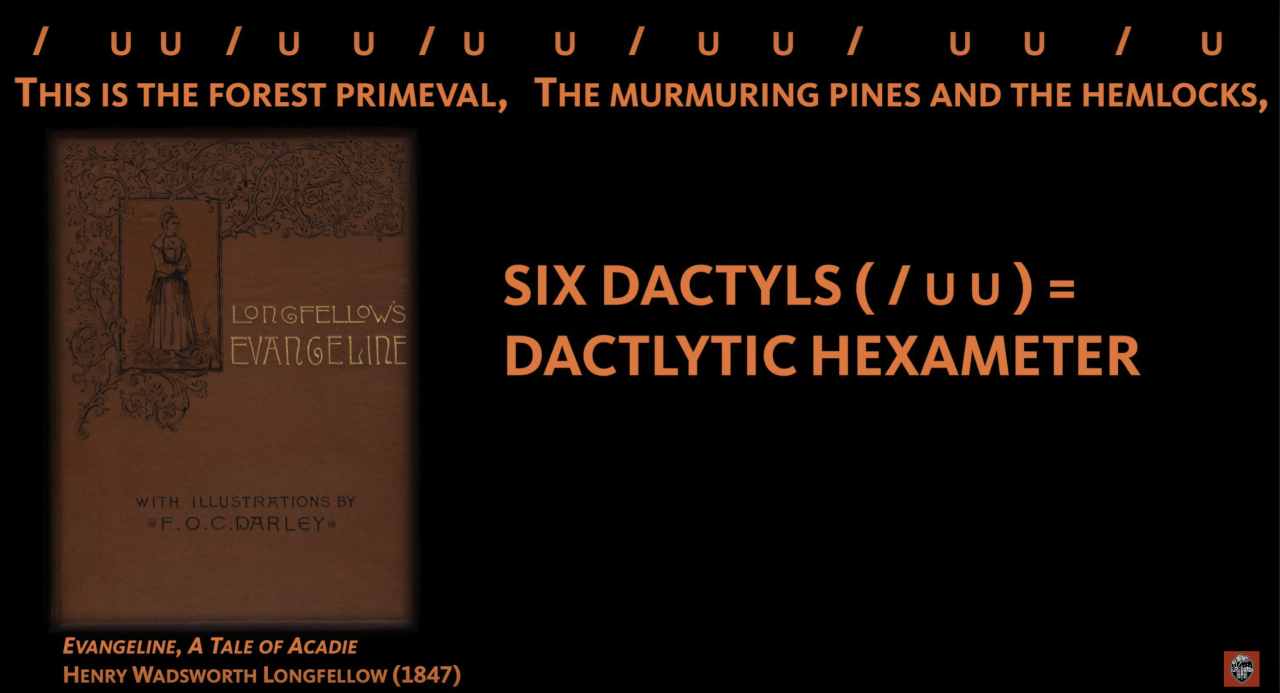 Drownin' in compliments, pool in the backyard that look like Metropolis
I think I'm sellin' a million first week, man, I guess I'm an optimist
Born in Toronto, but sometimes I feel like Atlanta adopted us

Though the subject is obviously very different, the meter here is identical to Longfellow’s (and, by extension, Homer’s) epic poetry.  Because there are six dactyls in each line, the meter of this song is also dactylic hexameter. 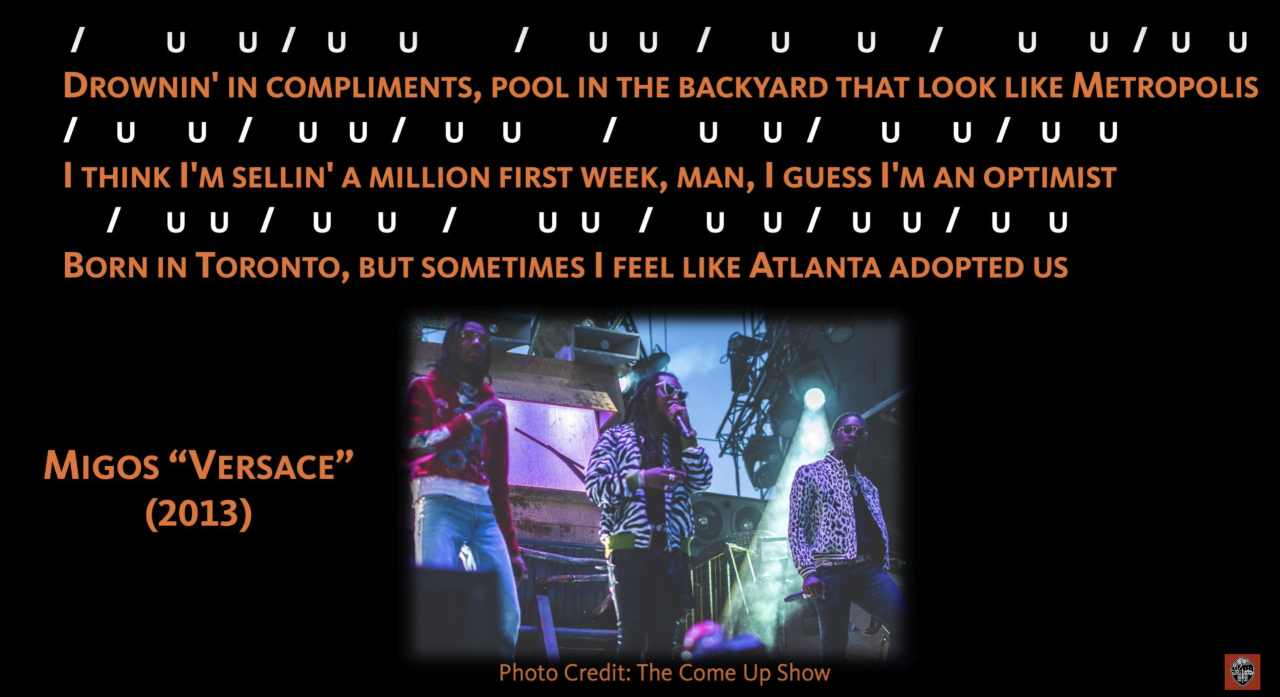 Iamb, trochee, anapest, dactyl.  If you can recognize these four kinds of metrical feet, you’ll be well on your way to reading poetry in a clearer and more natural sounding way.  The next step, of course, is to determine why that matters—how meter can be used not only to read a poem or song but also to interpret it.

While there are many ways to answer this question, let me give you one simple suggestion that I have found useful in my teaching.  Once you have identified the dominant metrical form in a given poem, look for moments where the meter breaks from that form.  These moments are often good places to build out an interpretation, because when we spot them, we can ask WHY the meter breaks at that place and what that sonic dissonance might be conveying.  Consider the start of John Milton’s epic poem “Paradise Lost,” which tells the story of Adam and Eve’s exile from the garden of Eden. While the poem is written in blank verse iambic pentameter, see if you can spot the moment where the meter breaks in these opening lines: 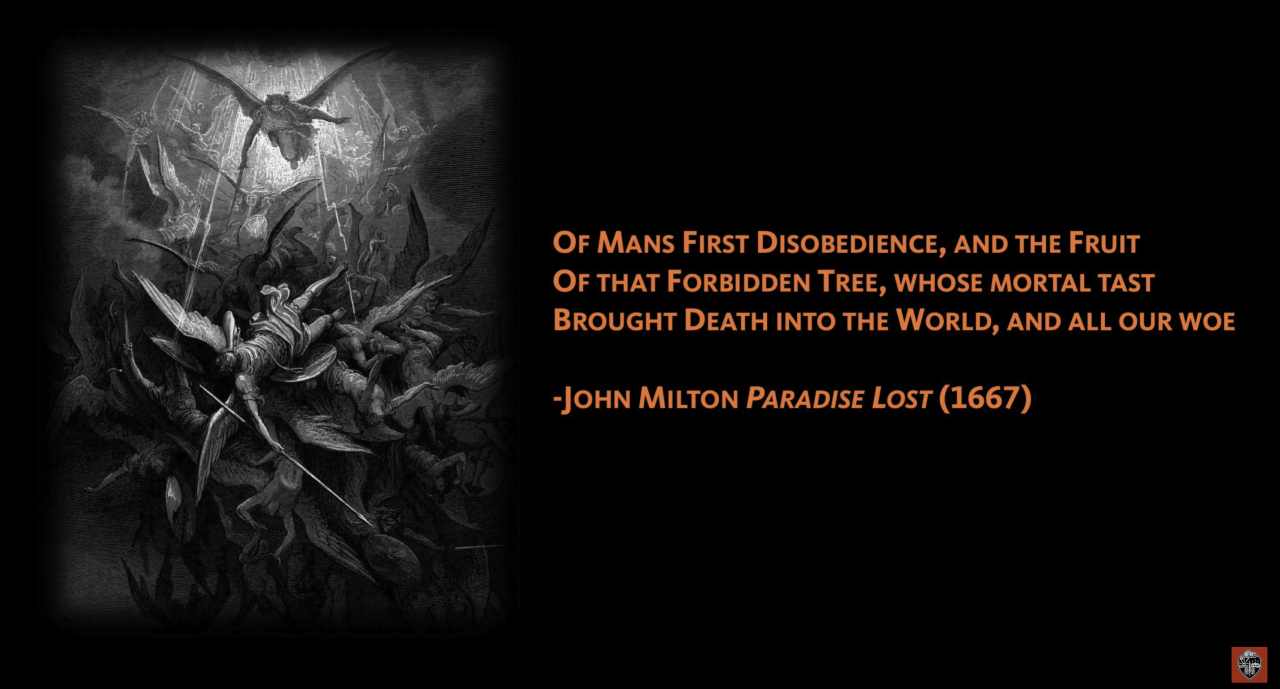 “Of Mans First Disobedience, and the Fruit

Of that Forbidden Tree, whose mortal tast

Brought Death into the World, and all our woe”

If you can spot the metrical problem, you can now ask WHY Milton might have chosen to break the meter at that specific moment. If you have any ideas, I hope you’ll share them with me in the comments section of the video.  In the meantime, good luck, stay healthy, and happy reading.

Robert Herrick's 17th century poem "Delight in Disorder" offers many opportunities to read for sonic disorders.  The poem is suitable for metrical as well as rhyme analysis on the order of those discussed in the video and the "What is Rhyme?" video. Another good poem to hone your reading ear is Elizabeth Bishop's famous villanelle "One Art." For more on Milton's meter, see our "What is Blank Verse?" video.

Writing Prompt: Determine the metrical scheme of Herrick's poem. Notice any moments in the poem that Herrick seems to break from that scheme. Why might Herrick have chosen to break the scheme at these moments? How might this metrical analysis contribute to the poem's meaning?