What is Alliteration? || Definition & Examples

"What is Alliteration?": A Literary Guide for English Students and Teachers

What is Alliteration? (English and Spanish Subtitles Available in Video. Click HERE for Spanish transcript.)

Alliteration is the repetition of the same sound at the start of a series of words in succession whose purpose is to provide an audible pulse that gives a piece of writing a lulling, lyrical, and/or emotive effect.

This paragraph is an example of alliteration.

You can see a more subtle, much better example in Jhumpa Lahiri’s short story “This Blessed House”:

“Sanjeev did not know what love was, only what he thought it was not. It was not… returning to an empty carpeted condominium… turning away politely when the other men eventually put their arms around the waists of their wives and girlfriends… or working his way methodically through the major composers that the catalogue recommended.” 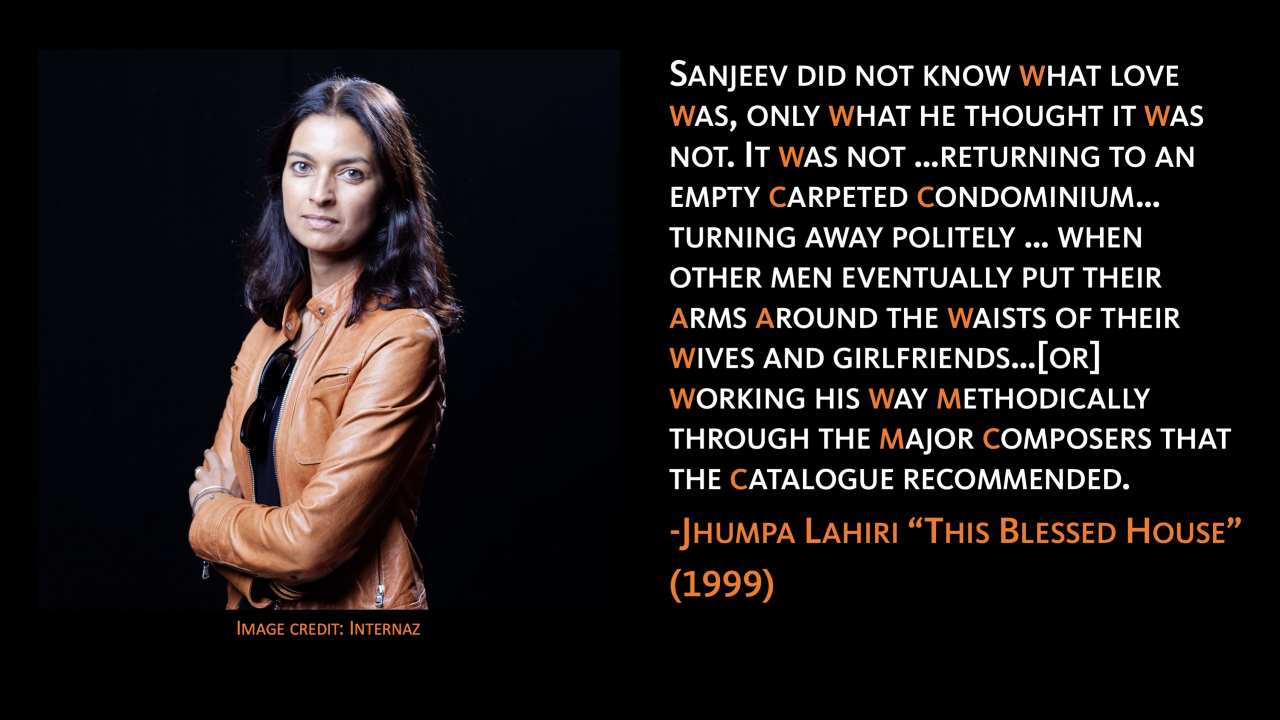 In this passage, you can see how the gentle pulse of repeated initial sounds adds a sort of somnolent, ruminative character to Sanjeev’s wistful thoughts about what love is – and isn’t. Alliteration here isn’t just an ornamental characteristic of the prose. It also does something to you as a reader, making you sway, perhaps, as you read, making you feel some of the feelings that the fictional Sanjeev is feeling by putting the language into your body.

Because alliteration is a type of repetition, but also because it’s playful and musical, it has a mnemonic quality. It helps you remember things: for this reason, alliteration is often used in the corporate world. For example, organizations like Ted Talks, DoorDash, Dunkin Donuts, and PayPal probably wouldn’t be as successful if they were called Ted Speeches, PorchDash, Dunkin Pastries, and PayFriend. Repetition legitimizes – these business names are easy to remember, but they also somehow “feel” more trustworthy than their non-alliterative alternatives.

Alliteration is a powerful rhetorical tool, but it’s also really important to English-language literature and poetry, and to find out why it’s so important, we need to travel back in time to some of the earliest extant examples of the English language.

Around a thousand years ago, the English language, and specifically English poetry, looked something like this: 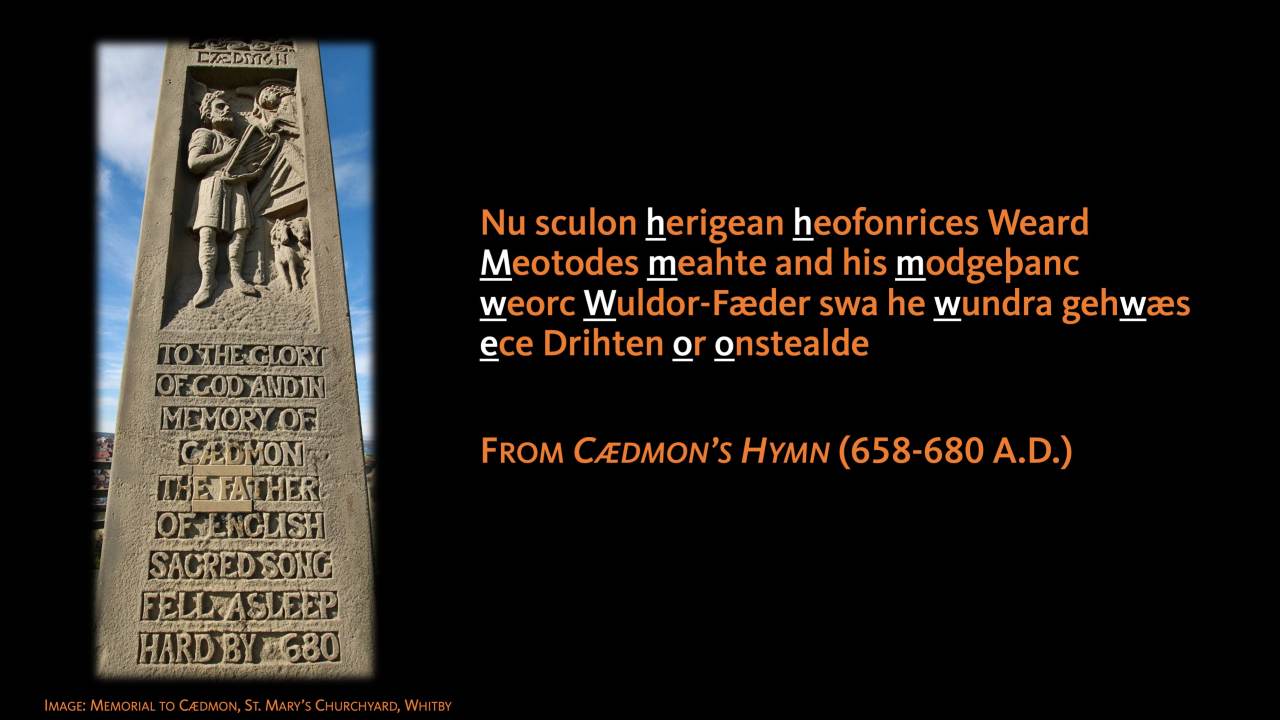 You don’t need to know Old English to hear that these lines of poetry don’t use end-rhyme, like many poems in English do today. That’s because English poetry for many hundreds of years couldn’t care LESS about end-rhyme. Instead it used alliteration, or what in this context we call head-rhyme, like you can see in this Old English example.

The reasons for this have to do with a couple qualities of the English language and other related languages in the Germanic language family, like German and Old Norse. These languages differ in some important ways from other European languages, especially Romance languages like French, Italian, and Spanish; these are languages that often use end-rhyme in their more traditional poetic forms.

So, what makes English different?

Unlike Romance languages, which put word stresses on the last or penultimate syllable of a word, English tends to stress the FIRST syllable in its words. You can hear this difference in stress really clearly if you look at some French and English cognates:

Second, unlike many verbs and nouns in Romance languages, English verbs and nouns don’t have a lot of reliable, similar word endings simply because of the way English grammar works. The reasons for this are beyond the scope of this video. But essentially, what this means is that it’s actually harder to rhyme in English than in French, even though the English language has anywhere from 2 to 4 times as many words in its vocabulary.

So you can see why English poetry would tend not to stress the final syllables of a line of poetry, and instead stress the similarity of initial sounds of words (using alliteration or head-rhyme): the final sounds of English words just aren’t as important as the first sounds. Alliteration works well with some of the stresses and traditional grammatical forms of the English language. This was true a thousand years ago, and it’s still (pretty) true today.

But this doesn’t mean that the poetic use of alliteration is just about stressed syllables and grammatical forms. When poets use alliteration, they carefully balance these characteristics with the meanings of words and the emotions or tone of the passage. The point of alliteration isn’t just to line up word stresses with initial sounds, but, in doing so, to create a euphonous art, art that makes you, the reader, feel something.

I’ll give you an example. Some of the best contemporary poetry – rap music – uses alliteration masterfully, but as you’ll see, it just doesn’t sound particularly good when I recite it out loud. Here’s an example from Mick Jenkins’ Ps and Qs. 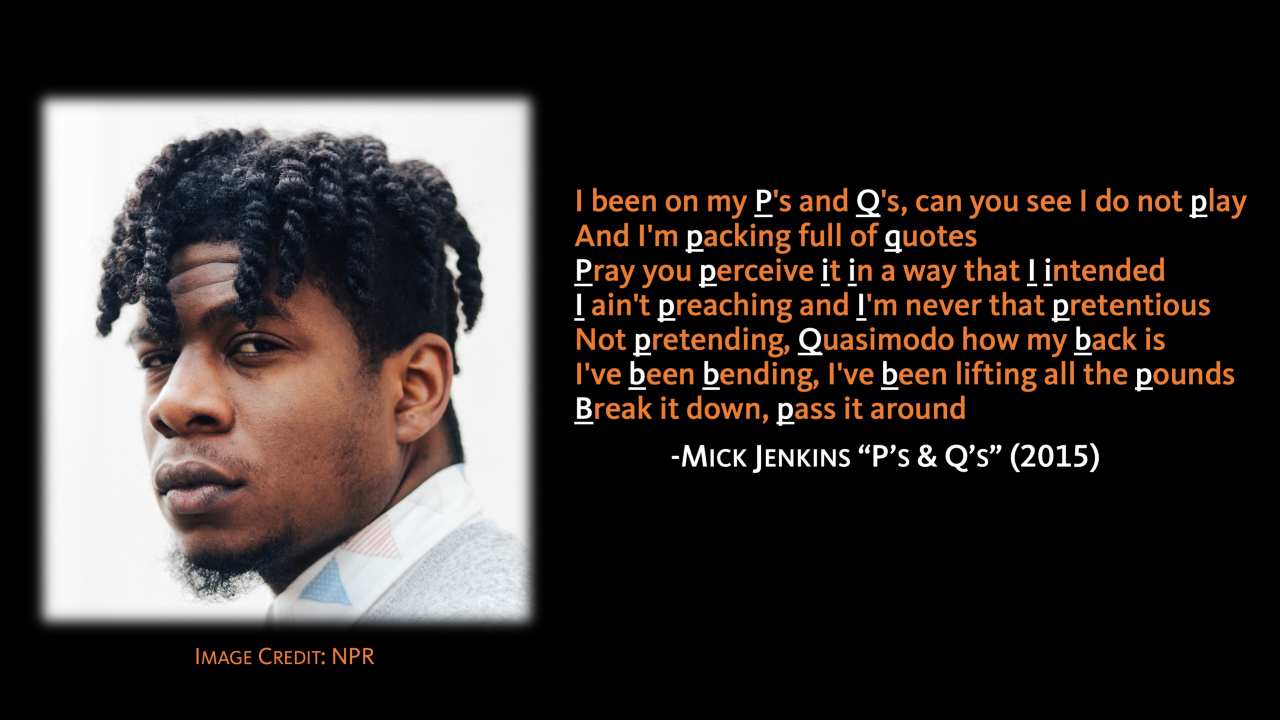 I been on my P's and Q's, can you see I do not play
And I'm packing full of quotes
Pray you perceive it in a way that I intended
I ain't preaching and I'm never that pretentious
Not pretending, Quasimodo how my back is
I've been bending, I've been lifting all the pounds
Break it down, pass it around

You can probably hear the alliteration, but did you feel it?  The virtuosity of this interlaced alliteration – where repeating initial P, I, and B sounds are braided into each other – doesn’t shine through when I read it in the same way as it does when Mick Jenkins does it. I’m missing a sample, bass line, and a beat, and I definitely don’t have his vocal timbre, his cadence, or his flow.

This is one of the beautiful and complex – and sometimes frustrating – things about alliteration: because it’s a rhetorical technique that is built out of the idea of sound, the “quality” of an alliterative line – how effective it is – often depends on things that happen beyond the written word on the page, whether that’s in your actual ear, or in the ear of your mind. Next time you encounter alliteration, don’t just ask yourself how the alliterating words match up with the “important” words in the sentence or poetic line (although you should definitely do that!). Also ask yourself how it sounds when you read it out loud, and what it might have sounded like in the context of this text’s first performance.