What is Symbolism? | Definition & Examples

"What is Symbolism?": A Guide for English Teachers and Students

"What is Symbolism?" Transcript (Spanish and English Subtitles Available in Video. Click HERE for Spanish Transcript)

Symbolism is the idea that things represent other things. What we mean by that is that we can look at something — let’s say, the color red — and conclude that it represents not the color red itself but something beyond it: for example, passion, or love, or devotion. Or maybe the opposite: infidelity. The color red can also represent blood. It can also mean stop ­— when you approach a traffic light. It can symbolize communism. In other words, it can mean anything you want it to mean. In other words, it means everything. Or: it means nothing, because if you can assign any kind of symbolic interpretation to it, it has no internal value, no fixed or unchanging or universal meaning. It has no special quality that designates it as a symbol of one particular thing.

So the questions is: are there universal symbols that communicate agreed-upon concepts? We could talk, for example, about white a symbol of purity or innocence or life. But again, that would be a very superficial reading of literature, because white could also signify paleness, bloodlessness, lifelessness — and death. So once again, if white can signify one thing and its opposite — life and death — what kind of symbol is it?

A more sophisticated way of approaching symbolism would be to say that things have symbolic qualities only in certain contexts — and sometimes they do not symbolize anything at all. If we want to quote Gertrude Stein: sometimes a rose is a rose is a rose. Sometimes a rose doesn’t mean love or courtship or passion or desire or devotion — or anything beyond itself. Some flowers happen to be red, others are white or blue, and they have no symbolic meaning, neither in real life nor in literature. 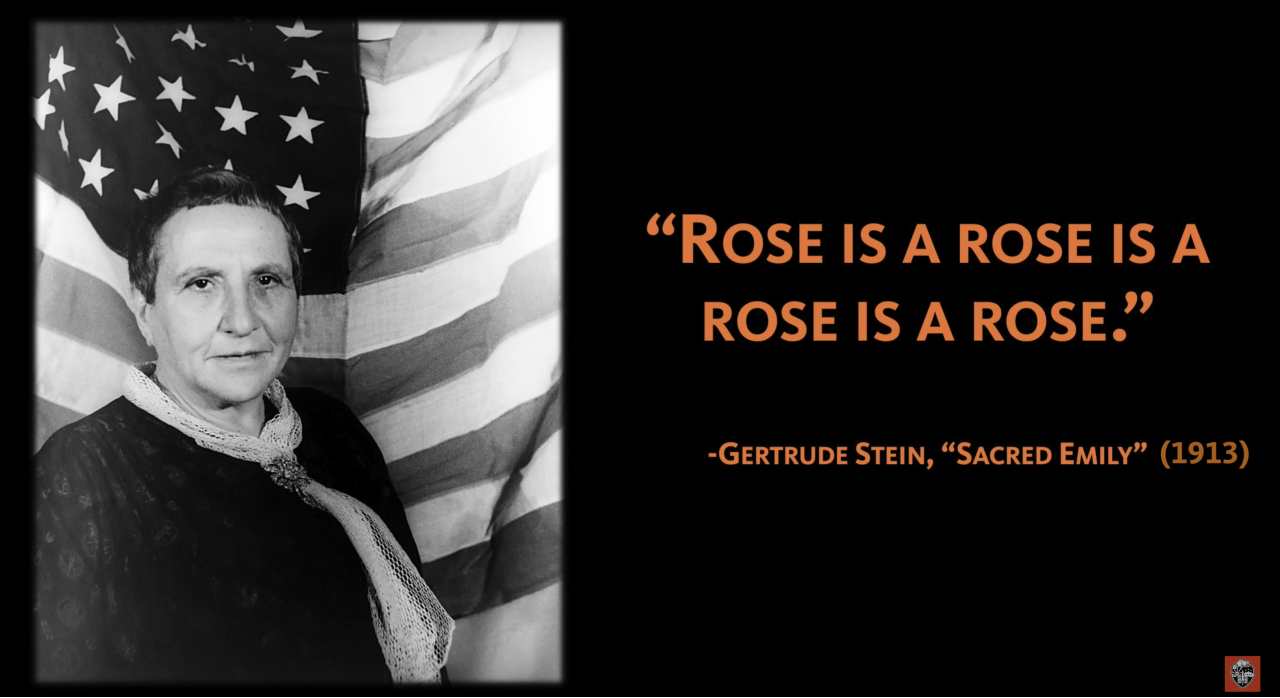 I think it’s very tempting to treat every element in literature as a symbol of something. For example, a storm brewing on the horizon must be a symbol of the emotional turmoil that the main character is going through; or, the black car that the main character drives is a foreshadowing of his death; and so on. It’s important to remember that sometimes a storm on the horizon simply represents bad weather. Some cats are white, some are black, some are ginger. That doesn’t mean that white cats are more innocent or pure, or that the owners of black cats are morbid characters who are going to die. We’re all going to die, and sooner than we think, unfortunately.

So where do we see symbols that are smarter, symbols that are more sophisticated, more complex? I think it all depends on the context, and I think that smart works of literature can establish certain textual elements as symbols that are not necessarily invested with any kind of predetermined meaning: elements that we don’t tend to think of automatically as symbols of anything.

Here’s an example. If we take this very interesting novel by Gilbert Sorrentino, Under the Shadow, what it does is it shows us a series of images — or textural elements, or textual components — and we have no idea what they mean or why they are repeated throughout the novel, again and again, in different configurations. But then when we look at one of these elements — let’s say, the moon ­— every time we see it, every time characters look at the moon, we realize, gradually, that they are actually looking back into their past, into their personal history, or childhood memories.

More specifically, at some point in the book, an amateur astronomer, who is a physician by profession, points a telescope at the moon, and when he looks through the lens, what he sees is a young couple, a man and a woman — or sometimes a young woman and an older woman — bathing in a lake. It’s very strange. He’s startled by this image. How it is possible that this is what he sees when the telescope is pointed at the moon? What we find out, later in the novel, is that he’s looking at his own parents, and all of a sudden he gains access to a repressed childhood memory. So the next time the moon appears, we know that it probably symbolizes — or somehow represents — a particular hidden layer in the psychological makeup of the character looking at the moon. 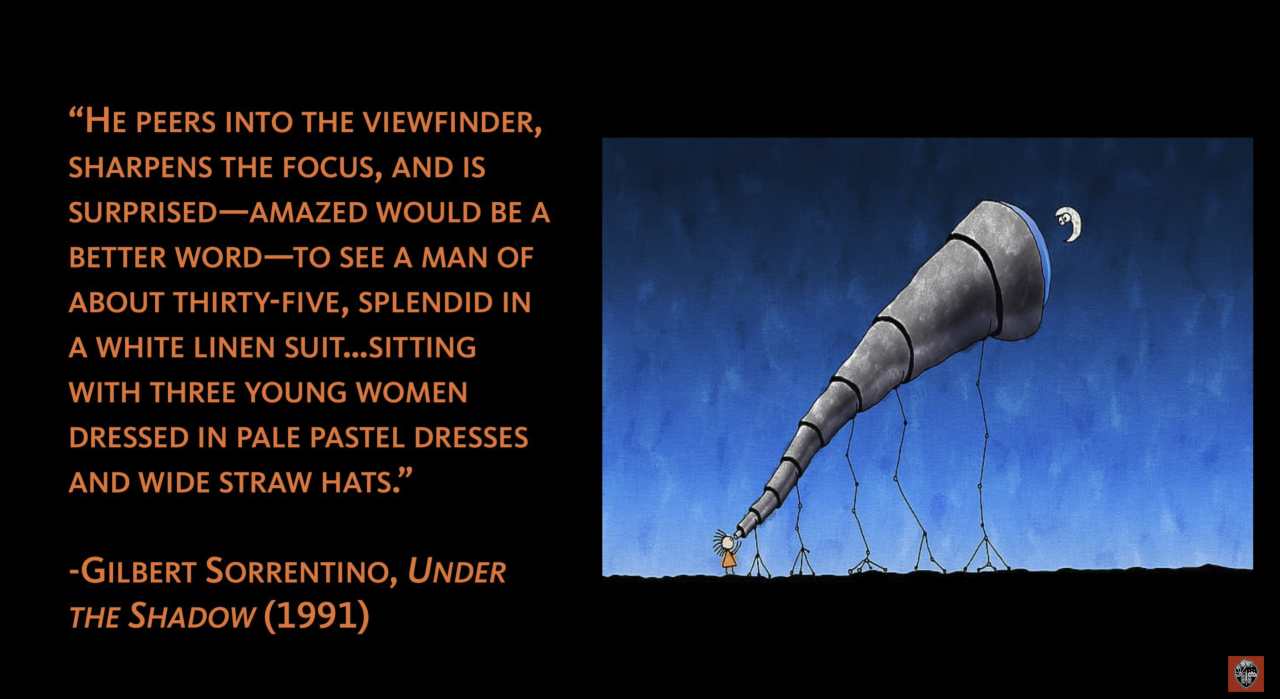 What it means is that the concept of identifying symbols in literature is not necessarily based on the idea of decoding — or replacing a familiar symbol with a designated meaning. The point is to examine textual elements in new contexts and attribute to them symbolic meanings that may have never existed before.

Students often interpret F. Scott Fitzgerald's novel The Great Gatsby symbolically, but they should also ask why the narrator (and, more importantly, Gatsby) wish to imbue their world with symbolic value. Gatsby's goal in the narrative is to bring the world into a symbolic order of his liking. In this respect, he is like some eager "symbol hunter" readers mentioned in this video. But the symbolic worldviews of the novel's characters often conflict both with each other and the material world, most notably (and ironically) when the minor character Wilson confuses an advertisement for Doctor T. J. Eckleburg's business with God. Along similar lines, understanding the symbolic worldviews of narrators--how they ascribe certain particular and idiosyncratic rather than "universal" values to certain objects and people--can also help us to understand them as unreliable narrators.

For a simple example of this idea, consider H.D.'s short poem "Oread."

Writing Prompt: Who is the speaker of H.D.'s poem?  What does Oread mean? How might the Oread's worldview lead her to symbolically represent sea waves as "pines"?

Writing Prompt: How might we understand the narrator's dreams and fantasies of having x-ray vision and the ability to fly symbolically? What does Supergirl stand in for here, and what message might Cofer's story be delivering through this symbolic attribution?