What are Vehicles and Tenors? || Definition & Examples

"What are Vehicles and Tenors?": A Literary Guide for English Students and Teachers

What are Vehicles and Tenors? (English & Spanish Subtitles Available in Video; Click HERE for Spanish Transcript)

These terms are taken from the famous rhetorician IA Richards, who wrote about the structures of metaphors way back in 1936.  Vehicles and tenors may sound confusing, but they are easily understood after seeing a couple examples.  Here’s one from a famous pop song from the late 90s:

I must confess, that my loneliness is killing me now
Don't you know I still believe
That you will be here
And give me a sign
Hit me, baby, one more time 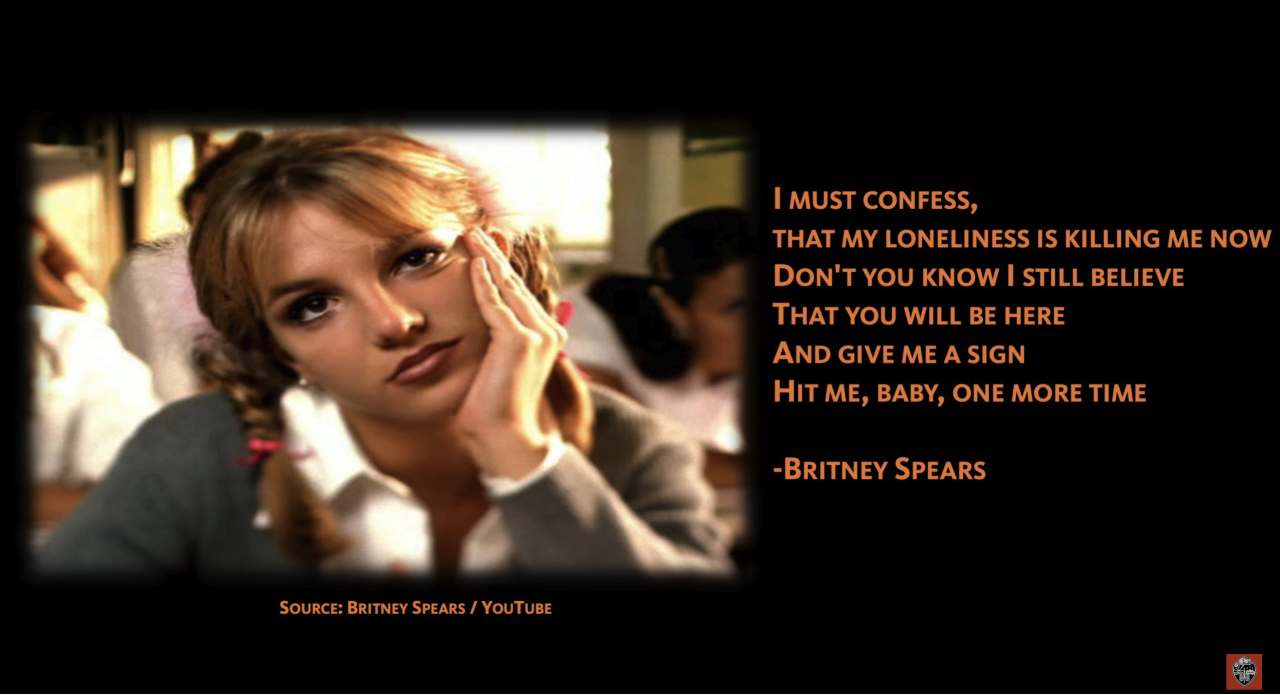 I probably don't need to tell you that Britney Spears isn’t asking a literal baby to literally hit her (that would be a much darker and more confusing song).  Instead, she’s using figurative language to describe her feelings for her ex.  To make sense of these lyrics, we have to match up the vehicles that she uses with their respective tenors.

Let’s start with the easiest one first.  At the end of this quotation, Spears employs a very common metaphor, in which the word “baby” is a vehicle for what she really means: her ex.  Earlier, she uses another common hyperbolic vehicle, “Killing me,” to describe another tenor: her sadness.  Finally, “hit me” doesn’t mean literally attack me; it is another vehicle with a yet another recognizable tenor: contact me.

So why would you want to use these terms in your literary analyses? Well, breaking down a metaphor into a vehicle and tenor can remind us to ask questions about the relationship BETWEEN the two terms. Here, it’s useful to bring in two other terms that are often associated with figurative language: ground and tension.  The “ground” is the thing or things that the vehicle and tenor have in common.  In other words, the ground in what enables the metaphor to work—to make sense.

A good metaphor, or simile, or synecdoche will balance between ground and tension.  Too much ground means that the metaphor or simile won’t delight or surprise.  If I something like say, “this pen is like a pencil,” I’m using way too much ground and not enough tension. That simile doesn’t throw the element of comparison into sharp relief.  But the opposite scenario is equally bad.  If I say, “this pen is like a t-shirt,” my audience won’t have a clue as to what I mean, and the simile doesn’t work.

Let’s move to a more complex example described in Professor Tim Jensen’s “What is a Metaphor?” video. In that lesson, Jensen describes the controlling metaphor of invisibility in Ralph Ellison’s Invisible Man.  The title, as you probably know, is an allusion to HG Wells’ famous novel of the same name and its subsequent film adaptations, in which a scientist literally turns himself invisible and enlists this power to carry out a series of thefts and murders as he tries to reverse the process. Ellison alludes to that novel at the start of his story, but he is careful to showcase the tension as well as the ground in the metaphor: 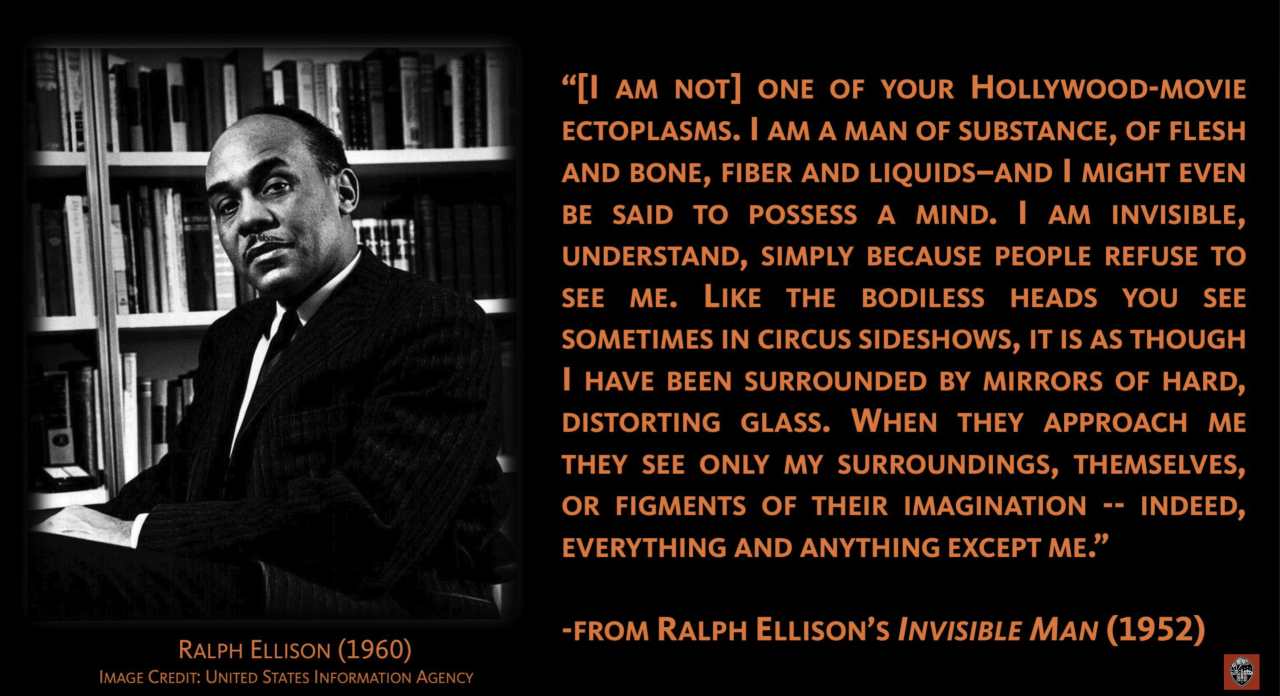 [I am not] one of your Hollywood-movie ectoplasms. I am a man of substance, of flesh and bone, fiber and liquids -- and I might even be said to possess a mind. I am invisible, understand, simply because people refuse to see me. Like the bodiless heads you see sometimes in circus sideshows, it is as though I have been surrounded by mirrors of hard, distorting glass. When they approach me they see only my surroundings, themselves, or figments of their imagination -- indeed, everything and anything except me.

There are a ton of things that we could do with this passage with respect to the tension and ground between the vehicle (the invisible man) and tenor (the narrator).  We could ask, for example, why Ellison invokes a pulp Hollywood story to ground how people view the narrator.  At the same time, we could ask how he sets that metaphor in tension with how he presents himself.  We could also ask how the narrator’s race operates here—how the visible presence of his black skin renders him an “invisible” body without a head to the white people around him. Finally, we could ask what the narrator means by “seeing me”—does he mean that verb literally, as in seeing the body of a person or does he mean that figuratively, as in seeing the person who inhabits that body?

There is, obviously, a lot of tension as well as ground here, which is what makes Ellison’s metaphor different than the dead metaphors described in the song. But this isn’t to say that pop songs can’t also be complex. Let me leave you with one final example, a pop song that moves beyond a dead metaphor.

In her 2008 hit song “All the Single Ladies,” Beyoncé Knowles-Carter sings about her alter ego, Sasha Fierce, meeting an ex at a club.  The chorus goes: 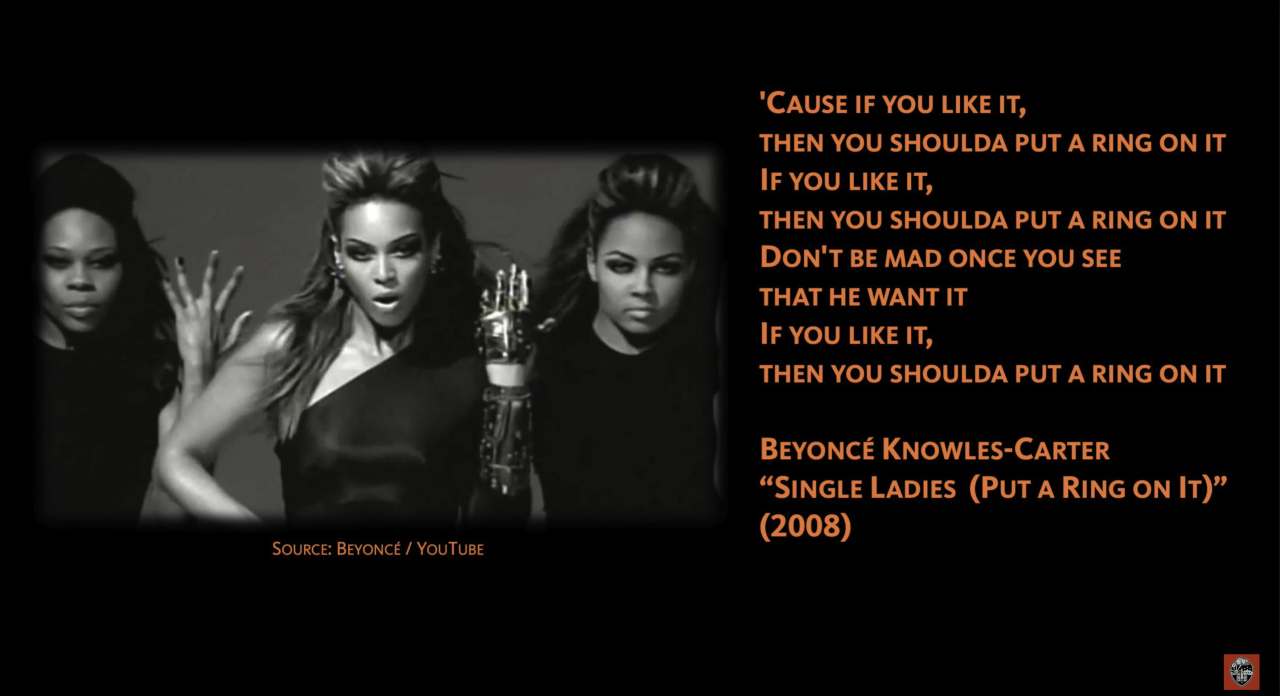 The two vehicles here are “it” and “put a ring on it,” but figuring out what they mean takes a bit of work on our part, which is one of the reasons why the song is so terrific.  Clearly, you put rings on fingers, so “it,” the vehicle, can in one sense be understood literally as Sasha Fierce’s finger. Putting a ring on someone’s finger is associated with marriage, so Sasha Fierce—standing in for all the single ladies--is metonymically taunting her ex for not proposing to her when he had the chance.

But that same vehicle—“it”—is doing something else in the first part of the line. Sasha probably isn’t saying that her ex loves her ring finger. She also isn’t necessarily talking about herself here, as she probably wouldn’t call herself an “it.” Figuring out what this tenor might be—and the tension it produces between the first “it” and the second “it”—will help you to distinguish between good figurative language and great figurative language.

Some other terms referenced in this video are explained in the following links:

"What is a Metaphor?"

"What is a Synecdoche?"

A good type of story to explore these different kinds of figurative language is an allegory, in which two stories--a literal story and a figurative story--are superimposed upon one another. Consider the story "Young Goodman Brown" by Nathaniel Hawthorne, which contains, arguably, all four of these terms.

Writing Prompt: Identify at least one metaphor, simile, synecdoche, and metonym in Hawthorne's story. When you have finished making these assignments, identify the vehicle and tenor of each example of figurative language. Finally, write a brief explanation of how these vehicles and tenors work together (or, perhaps, against one another) to enable allegorical meanings to emerge in this story.